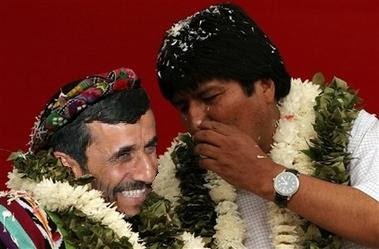 Morales to Moody:
Keep buying up the uranium
and you’ve got yourself a deal

Jihad Watch: “It’s about anti-Americanism,” the report’s author says. Indeed, Bolivia’s connections with Iran mirror those of Venezuela under Hugo Chavez: Both countries’ leaders fancy themselves populist heroes bent on sticking a finger in the eye of Uncle Sam. And both have been reported to have shipped uranium to Iran. What neither seem to have taken into account, however, is that Iran has its own agenda for its activity in Latin America, and at the end of the day, infidels are infidels.”

Mighty big troubles ahead if this is allowed to go unanswered. KGS

Other leaders of Islamic groups in Bolivia, according to the OCS report, have shown evidence of sympathies with Islamic radicals. Fayez Rajab Khedeer Kannan, leader of the Asociacion Cultural Boliviana Musulmana (ACBM), has openly praised Libyan leader Muammar al-Qaddafi and asked the wealthy Islamic organization, The Libyan International Center for Studies and Research of the Green Book, to heighten its missionary efforts in Bolivia. Roberto “Yusuf” Chambi Calle, president of the Fundacion Cultural Islamica Boliviana (FCIB) is friendly with a possible associate of Moshen Rabbani, a known Iranian terrorist and the former director of a Buenos Aires mosque.

Some Latin America analysts say religious organizations like these could provide cover for more radical groups.

“Clearly, jihadists, or potential jihadists, would look very intensely at ways of diversifying their sources of revenue, potential candidates for missions — intelligence missions, infiltration — people whose profile, whose point of origin leads people to be less suspicious,” said Ray Walser, a senior policy analyst specializing in Latin America at the Heritage Foundation. “I think there is a potential in these types of organizations — that may exist in Bolivia or elsewhere — of becoming the kind of points of diversification of radical groups in the Middle East.”

“It’s about anti-Americanism,” Mr. Walser told FOXNews.com. “It’s about, the enemy of my enemy is my friend.”

Some Latin America watchers are wary of the influx of Iranian money into Bolivia and warn that economic investment could provide a convenient mask for extremist groups’ illicit activities….