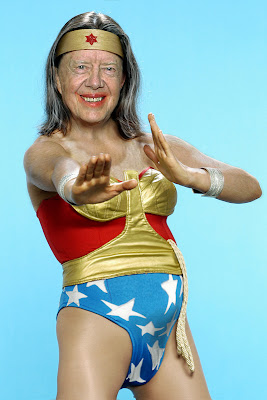 Jimmah:
It’ll take more than just road bombs to stop
my meddling into affairs where I’m not wanted

If the report is to be believed, the Hamas have a need to dispence with the failed former US president, Jummy Carter. It’s not the first time that the US has been targeted by Arabs in Gaza, three Americans were murdered by a car bomb there some years ago. The motive is beyond me, other than perhaps, trying to absurdly blame the Israelis.

UPDATE: Haaretz is reporting that Al-Qaida terrorists in Gaza had been behind the planting of the bomb.

Palestinian sources reported Tuesday that former US president Jimmy Carter was the target of a thwarted assassination attempt, according to Israel Radio. Reportedly, there was a cluster of explosive devices stashed near a road he was scheduled to travel during a visit to the Gaza Strip. The Jerusalem Post could not verify the report.

Happier times with the genocidal maniancs 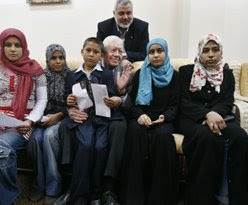 I wonder if he’ll become a regular on Hamas’ children TV program, as the “Peanut” only to be in the end, crushed by Israeli boots. Carter is an embarressment and a fool, as well as being complicit in keeping the jihadis’ hopes high, in finally finishing off the Jewish state. What an arse and an anti-humanitarian.

Haaretz: “He ignored a U.S. government ban on dealings with Gaza’s Islamist rulers Hamas and held talks with its leaders“

He’s not above the law, and should be arrested for meeting with Hamas terrorist operatives upon his return to the United States. KGS