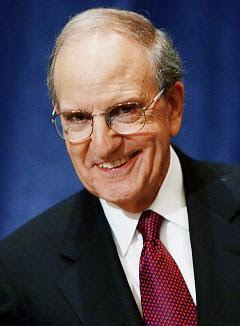 George Mitchell: We got it covered

The present US administration is hopelessly in way over its head in its misguided belief that, Obama’s ‘niceness’ and middle name will actually translate in actual gains for the US in the ME region. It’s a mugs game, and all the major Arab players in the region know it all to well, they’ve been doing the Middle East shuffle for some time now, and have their parts down pat.

Those politicians who think that they can force a settlement to the Arab-Israeli conflict when the Arabs (called the Palestinians) haven’t shown any inclination of actually wanting a state of their own, are naively mistaken. Committing an administration’s efforts to such nonsense only serves to whet the Arabs’ appetite for having it all, for if the US led West refuses to hold the Arabs accountable for launching a war on Israel after it vacated the entire area of Gaza, what will stop them from continuing the conflict once they secure a state of their own?

A Palestinian state brought into existence prematurely, will only end up in a major all out war between Israel and the Palestinians, as well as with those Arab armies risking to align themselves with nascent terrorist state. It’s as clear as the nose on one’s face, but these politicians will still try and defy the laws of gravity, just because they believe it can be done. Yeah riiiight. KGS

‘Palestinian state as soon as possible’

President Obama remains committed to actively and aggressively seeking comprehensive peace in the Middle East. This includes supporting the establishment of a Palestinian state as a homeland for the Palestinian people as soon as possible,” Mitchell told reporters in Beirut.