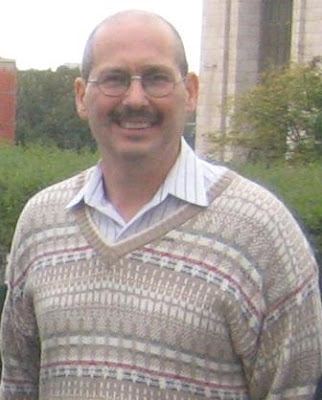 Dr.Andy Bostom: Obama’s speech catered to Cairo’s history
which is steeped in Nazism and the jihad ideology

The Tundra Tabloids’ dear colleague, Andrew Bostom, was interviewed on a US radio station shortly after the Obama Cairo Speech on June 4th. Andy’s views on the Cairo speech, as well as his interesting history lesson on Al-Azhar University’s traditional role of being the prime educating force for the Islamic doctrine of jihad, moved me to transcribe the entire interview in order to preserve it for the historical record. Read and learn. KGS

Intro:Obama: ..to often are said only behind closed doors, there must be a sustained effort to listen to each other, to learn from each other, to respect one another, and to seek common ground. As the Holy Ko’ran tells us, be conscious of God and speak always the truth.

Helen Glover: This is talk radio 920 WHJJ, and I’m Helen Glover. That was the president yesterday, that speech in Cairo, where he said uh, change can not happen over night, and he also talked about calling a new beginning between US and Muslims and any world order that elevates one nation over another will fail. Saying Iran should have the right to have access to peaceful nuclear power if it complies with its responsibilities and he reiterated his support for the Palestinian state. I played that one clip there, because all I could think of is “Quo Veritas”, you know, What Is Truth, the exchange with Jesus and Pontius Pilate. What is truth, truth in the Koran, is that the same as my truths? Dr.Andrew Bostom of Rhode Island Hospital, and author of The Legacy of Jihad and also author of Legacy of Islamic Anti-Semitism joins us now, Dr. Bostom, welcome and good morning.

Dr.Andrew Bostom: Thanks very much for having me Helen.

Helen Glover: I’m wondering, we heard the words yesterday and we can sit and parse those words and tear them apart and analyze them but, I want to know how you feel those words were viewed in the Arab/Islamic world, in the areas that he was speaking especially Saudi Arabia, Egypt and Iran. Did they look at that as maybe a weak president?

Dr.Andrew Bostom: I think unfortunately, they undermined any reformists movements that may actually exist in the Islamic world, eh,.. because what you get is just a series of bowdlerized platitudes if not outright misrepresentations of Islamic doctrine and history, eh.. past and disturbingly in our present era as well, which only reinforce the rigidity of classical Islam. I thought it was quite telling that one of the sponsors, as he in his very opening remarks, Mr. Obama talked about Al-Azhar (University) being one of the sponsors of this event. And in fact, he’s right in one sense, I mean, for over a thousand years Al-Azhar University in Cairo is really the academic shrine as much as Mecca is the religious shrine of the global Muslim community, so it’s very symbolic that he was there.

Dr.Andrew Bostom: It’s really the pinnacle of Islamic religious education. Um, John Roy Carlson who did a remarkable series of investigative reports, actually during WWII in this country, and he pursued Nazi, Fascist movements in this country, Bundis movements, he had gone under cover. And after the war he followed the trail overseas, and where did the trail lead him? It lead him to Cairo, because Egypt became a major sanctuary for Nazis by the mid 1950’s under (Abdel) Nasser, but almost a decade earlier when Carlson was there in the late 40’s early 50’s, he documented not only wide spread Nazi sympathies that were in Cairo, but it was coupled to an Islamic religious fanaticism at Al-Azhar itself. He went there, he interviewed the clerics and he provided this very apt description of this tradition. [Bostom: Carlson provided this apt description (in his book “Cairo to Damascus”) of Al Azhar’s “tradition”—“]

He says: “every year Al-Azhar graduated hundreds of missionaries who preached its fanatic doctrine throughout Asia, Africa and the islands of the Pacific.” He goes on to comment, “though Mohamed, the Muslim prophet died 632, I found out at Al-Azhar, his preachment’s were considered fresh and applicable today, with absolutely no modifications”. And then he goes on to describe further his other meetings with the then rector of Al-Azhar University, who of course preached jihad, holy war against Zionism, and he was a friend of the jihadists and Nazi collaborating ex-Mufti of Jerusalem, and god-father of the Palestinian movement, Hajj Amin Al-Husseini who also found sanctuary in Cairo after World War II.

And the reason this is relevant and why Obama’s speech is so disturbing, is because fast forward to our era, and I read this plea from an Egyptian sociologist (Sayyed al-Qimni) a sociologist in Egypt, an Egyptian, a local, who was lamenting the fact that today, still, this was written in July of 2004, “that jihad war and the brutal subjugation of infidels under sharia Islamic law was still being taught as Al-Azhar.” He ends his plea, the Egyptian sociologist, “what kind of thing are we teaching our next generation that it has the right to attack other countries in order to convert them to Islam?” And we wonder were terror comes from?

This is an Egyptian and these are kinds of people that unfortunately that Mr.Obama in undermining when he just cites these platitudes, eh.. it’s very very disturbing

Helen Glover: You know I’m wondering there’s no stop to Israel on this trip, he’s already now at Landstuhl air force base in Germany and he’s going on to Buchenwald today, ah.. there’s no stop in Israel, he’s calling for a two state solution with Israel, where does this leave Israel? I mean it leaves them pretty much hanging out there by themselves.

Dr.Andrew Bostom: Oh absolutely, but it’s worse than that because, you know there’s, I’m really tired, as a Jew, I’m really tired of these appeals to mass, massacred Jews of past generations via the Holocaust, and these so called symbolic trips to Aushwitz to Buchenwald etc. etc.. He had the temerity in that speech to make the immoral equivalence between the Holocaust and the so called plight of the Palestinians.

Helen Glover: I mean his church supported Hamas. I mean their doctrine was printed in his church bulletin, the church of Jerimiah Wright, you know they had that so,…that doesn’t surprise me that he is..I said this during the election, I couldn’t believe that he had support from Jewish supporters in this country, when it was very evident, he didn’t hide that during the election, his support for Hamas.

Dr.Andrew Bostom: Oh absolute… listen, the fact is that Wright was a very virulent anti-Semite, he still is a very virulent anti-Semite so is (Bill) Ayers. Ah yes, this is very troubling, I don’t know what’s going on in the minds of Jewish leaders that just chose to ignore all this. But I think there in the speech, the immoral equivalence between the Holocaust and the plight of the Palestinian people…

Helen Glover: Dr.Andrew Bostom of Rhode Island Hospital and author of The Legacy of Jihad and also author of Legacy of Islamic Anti-Semitism, thanks so much for joining us, I’d love to talk to you again on this subject because this is certainly going to have an impact for at least the immediate future, thanks so much

Dr.Andrew Bostom: Thanks for having me.