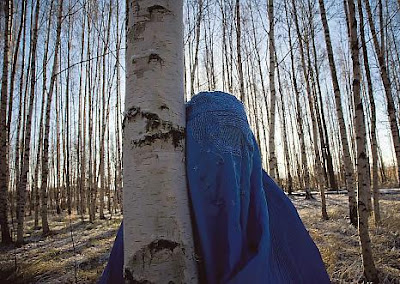 Burka clad gal: I’m doing my best to hug this birch,
that’s as far as my integration goes
You know its bad when the people who do in fact know better, start to sound the alarm. Ilkka Salmi and Jorma Vuorio co-authored an op-ed published in the bird-cage lining paper called the Helsingin Sanomat, warning that if Finland didn’t take matters more seriously concerning the integration of its Muslim immigrants, we will be seeing the same kind of violence and mayhem as in Sweden and France.The warning shot has now been fired over the multiculturalist-political elites’ bow.

“In Finland several ethnic minority groups are growing rapidly. In 2008, 4,035 people sought asylum or other protection in Finland. This is 2,500 more than in the previous year. The growth has continued this year, and the Finnish Immigration Service estimates that by the end of December there will have been about 6,000 applicants. As a result, the number of immigrants coming into Finland will increase many times over on the basis of family unification. This especially applies to asylum-seekers from Iraq and Somalia. They are being driven to Finland especially by the tighter immigration policies of our neighbouring countries, and by the good level of Finnish social welfare. From the point of view of security officials, there are risks inherent to a strong increase in immigration, which could lead to serious problems for security.

This validates everything that Helsinki City Councilman, Jussi Halla-aho, has been saying for some time now. As a matter of fact, Halla-aho is facing a trial over his statement in which he offered an assumption that he did not regard as fact: “Robbing by-passers and living at taxpayers’ expense as a parasite is a national, possibly genetic characteristic of Somalis“. Read what he wrote in its entirety, to get the full flavor of what he was aiming at.

Risk factors include increases in crime, gang formation, violence, and disturbances of the peace. Such events have been seen in Europe – in Sweden and France, for instance. To prevent the risks from coming to pass, the integration of immigrants requires significantly more input from Finland. According to the prevailing opinion of European security officials, another danger in immigration is the infiltration of terrorists into the flows of immigrants.
This threat ties down a significant amount of resources of security services.

An additional challenge stems from the fact that asylum-seekers who constitute a threat cannot always be sent back to their countries of origin; their security situations can be so bad that sending them back is impossible for humanitarian reasons. In certain suburbs of Helsinki and Turku, the proportion of foreigners in the population has risen as high as 30 per cent. According to some studies, such a large concentration of immigrants can lead to uncontrolled ethnic isolation of the communities.

To prevent such problems there have even been proposals of enacting a partial curfew, which would be truly exceptional in the Nordic countries. These suggestions underscore the seriousness of the problem. The unrest caused by an atmosphere of marginalisation, rootlessness and anger are compounded, and spread to other similar suburbs. The risk of radicalisation of immigrants is increased by the rootlessness that they experience in their new home countries. This, in turn, is fed by the problems of integration. Second-generation immigrants often find it hard to identify with their parents’ culture and home country. They lack the kinds of anchor points of life that normally create security and balance.

Failures in integration establish a foundation for radicalisation, and in extreme cases, for terrorism. At the same time, concern increases over confrontations between the native population and immigrants, and over the disappearance of the values that are a part of democracy. This can result in increased racism, and an increase in the number of mutually hostile groups. For that reason, the importance of the ability of officials to react quickly is underscored. The Security Police (SUPO) is not currently aware of any individuals in Finland who would be actively involved in terrorist activities. On the other hand, there are strong indications that groups and networks involved in conflicts in Muslim countries get support from Finland.

Folks, both of these men desire to head off what has come to be a daily routine the Swedish police in the video “Changing of the Rosenguard“. It is due to the politics of the True Finns and independents like Jussi Halla-aho, that government officials like Ilkka Salmi and Jorma Vuorio dare to present their views, based not on politics, but on hard cold facts.At the Counterjihad conference in Copenhagen last month, a certified psychologist for juvenile offenders said that it was his experience that treatment for Muslim juvenile offenders has a misereably low success rate. It was his opinion that the treatment led to their becoming even more radicalized, due to the vast difference in cultures. Read the whole article here. KGS

UPDATE: Vlad Tepes has a new vid that dovetails with what the TT just posted. Summer of rage.