Skip to content
Home
/
2009
/
June
/
11
/
Uncategorized
/
United Arab Emirates: British Dive Instructer Jailed For Sexual Relations With Boss…….
Facebook
Twitter
Google+
LinkedIn
Pinterest
The U.A.E. pimps itself as the fountain of modernity
and the future for the Arab world 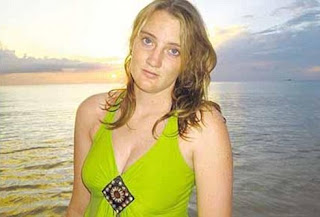 Roxanne Hillier: Accommodations are modern
the state however is neanderthalHow often have we seen it happen? Westerners lured to the Middle East by the facade of modernity and the flash of money, lulled by the warm dry air and the friendly smiles of the people, but only to be shocked back into reality when the ‘morality police’ come crashing through the door.That is the hard reality of Islam. The problems for foreigners in the ME are further compounded by the region’s tribalism, which is a volatile mix of relations trumping individual rights and the rule of law, and a catalyst for turning the most friendly of peoples into raging mobs if their sensibilities are deemed to be violated.It’s the Tundra Tabloids own view that the ME in general, save the Jewish state of Israel, should be approached by Westerners with extreme caution, and avoided whenever possible. It’s a hostile region that needs to be understood before setting foot into it, especially if one dares to seek employment there. KGSBritish engineer’s daughter jailed in United Arab Emirates
for having sex with her boss

The daughter of a British engineer has been jailed in the United Arab Emirates after being accused of sleeping with her boss. Roxanne Hillier is serving a three-month sentence following her arrest at a dive shop where she worked in Sharjah.
The 22-year-old was asleep in a room above the store when police broke down the door and arrested her. It was claimed she was having an affair with the shop owner, an Emirati, who was downstairs at the time.
Miss Hillier was also accused of being alone in the same room with him. Although the 22-year-old endured ‘humiliating’ medical tests to prove no sexual contact had taken place, she was convicted over the alleged affair last week.
The dive shop boss received a six-month sentence even though he also denied the relationship. Miss Hillier’s case is the latest in a string to highlight the United Arab Emirates strict laws on sexual relationships.
In separate cases, British women, Sally Antia, 44, and Marnie Pearce, 40, have both been jailed for adultery in Dubai. Sharjah is arguably the most conservative state in the UAE.
Even being alone in a room with a man other than a relative – which Miss Hillier was also accused of – is considered a crime. Her father Freddie said his daughter signed a confession, written in Arabic, which she did not understand. She later retracted the statement, but the case went ahead.
‘They were shouting at her in Arabic,’ he said. ‘She was scared and made the mistake of bowing to pressure. She thought that was going to get her off. He added: ‘We believed it was aimed at the boss of the place.My daughter was caught in the crossfire.’
Miss Hillier, who has South African citizenship, moved to Sharjah in November last year, where she lived in an apartment in the town of Khorfakkan on the east coast. She had only been staying at the diving shop while her house was renovated.
Her family, including her sister Maxine who works as a dive instructor in Abu Dhabi, have visited her in jail and said she was being treated well. ‘My wife and I feel very guilty that we have failed our kids,’ Mr Hillier said. ‘They went there to live their dream which has turned into a nightmare.
‘We encouraged her – these were their first jobs and it sounded great. Roxanne went for it and she was very happy there. ‘She said she loved her job, loved her clients but unfortunately in Sharjah to love seems to be a crime.’