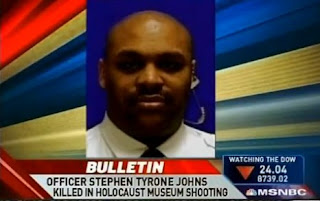 Stephen Tyrone Jones
A true hero
Neo-Nazi Von Brunn has something in common with many Muslims around the world, a loathing for Jews. And to make things even more interesting, his white-supremacist following have his anti-Christian rhetoric to ponder as well. But who said the illogical universe in which these moronic racists inhabit could be easily deciphered and understood, even by those who live within it?
I see that LGF was quick to label the much ballyhooed DHS report as being “vindicated’‘, I knew that would be the case before checking to see what the Lidless Eye had posted about the incident. CJ: “With the Tiller shooting and now this — the DHS report that caused such an uproar has been vindicated.”
Yeah right. Remember folks that’s the same report that refused to take issue with Islamic terrorism, an instead focused on the rise of ‘right-wing’ terrorism. Oh yeah, that’s the report all right. I like what Debbie Schlussel and Pamela Geller have to say. When US soldiers are targeted by an Islamic terrorist on US soil, Obama and the media show a lack of interest to talk about what was behind the attack, Islam. But when it’s white neo-nazi attacking a Holocaust Museum in which a black guard was killed, then that catches their interest.
Lets be clear about this, Pvt.Long and Stephen Jones were both victims of terrorism, the former being a victim of the Islamic jihad, and the latter being a victim of racial supremacism. Interestingly enough, the Obama administration doesn’t want to talk about the first killing, because it hits too close to home, but the second suits them fine, especially when they dwell on the Black-White issue.
Like Debbie and Pamela state, if not for the surge in anti-Semitism from the Muslim sector, the nut cases in the ”other” supremacist movements (black and white) wouldn’t be so emboldened to act out on their racist impulses against Jews. We have already seen another incident involving Black Muslim converts juiced up for jihad against the Jews, Von Brunn’s activities just happen to mirror their exact sentiments, and now we could be Witnessing a competition between the two,
Debbie is right in saying that the 9/11 movement got its start in the Middle East, and until that becomes a center of the media’s focus, the rise in anti-Semitism in all sectors will continue. KGS

WASHINGTON — A gunman opened fire inside the Holocaust Memorial Museum in the nation’s capital Wednesday, shooting and killing a security guard before other officers returned fire and shot the assailant, officials said.

The museum released a statement late Wednesday afternoon confirming that 39-year-old Officer Stephen Tyrone Johns had died of his injuries. He had served on the museum’s security staff for six years.

“There are no words to express our grief and shock over today’s events,” the statement said, adding that the museum would remain closed Thursday in his honor.

The museum confirmed that Johns was married but could not say whether he had any children.

Police are looking at an elderly man identified as James Von Brunn as the shooter, FOX News has learned — though D.C. Police Chief Cathy Lanier would not confirm the identity of the suspect.

“We have been told that the museum was on a list in his car of places that he wanted to target,” museum spokesman Joseph Rosboschil said.

The alleged shooter is the same James W. von Brunn who is a known white supremacist in his late 80s, MyFOXDC reported. He runs a Web site, Holy Western Empire, that carries several anti-Semitic statements.

Von Brunn was sentenced in 1983 to more than four years in prison for attempting to kidnap the Federal Reserve Board after a guard found him outside of a board meeting with a gun, knife and sawed-off shotgun.

Police said he wanted to take the board hostage because of high interest rates and the country’s financial problems, MyFOXDC reported.

On his site, Von Brunn insists he was trying to place the board under “legal, non-violent citizens-arrest.”