Skip to content
Home
/
2009
/
June
/
10
/
Obama-Gate
/
Skeletons in the Closet Watch: Obama’s Pastor Back in the News…….
Facebook
Twitter
Google+
LinkedIn
Pinterest
Rev.Wright:
“Of course I voted for him;
he’s my son. I’m proud of him” 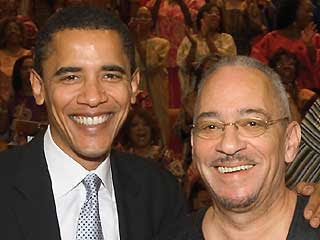 The Reverend ‘Dad’ Wright:
Them Jews aren’t going to let him talk to me!
Heh heh heh…..20 years Obama sat in this guy’s church, and then he said that Wright’s comments (that were published during the campaign) took him by surprise. What a bunch of hooey. The real Wright can’t contain himself, offer him a platform, and you’ll get a whole plate full of hate, no wonder the Obama campaign ditched him in 2008.
Let that Jew hatred roll of your tongue Rev.Wright, the way it did when your protegee sat in your putrid house of hatred and black supremacy for over a couple of decades. B.Hussein Obama never found reason to find a new church back then, because he was, and still is, of the very same opinions his ‘Rev’ hammered out every week from his bully pulpit of contempt and disharmony.
The Nation of Islam, black supremacy organization and Wright’s ‘church’ have a weird symbiosis going, and while they both claim different religious roots, there is still a strange, twisted sense of logic that binds them together. If not for the MSM’s own humanitarian racism, (that refuses to hold all peoples to the same high moral standards) Obama would never have been elected, because the MSM would have correctly latched onto the Obama racist/supremacist church scenario and it would have cost him the election. That’s a fact. KGS
Rev. Wright says he doesn’t regret
severed relationship with president

HAMPTON – – The Rev. Jeremiah Wright says he does not feel any regrets over his severed relationship with President Barack Obama, a former member of the Chicago church in which Wright was the longtime pastor.

Wright also said that he had not spoken to his former church member since Obama became president, implying that the White House won’t allow Obama to talk to him. He did not indicate whether he had tried to reach Obama.

“Regret for what… that the media went back five, seven, 10 years and spent $4,000 buying 20 years worth of sermons to hear what I’ve been preaching for 20 years?

“Regret for preaching like I’ve been preaching for 50 years? Absolutely none,” Wright said. Wright said that when he went to the polls, he did not hold any grudge against Obama.

“Of course I voted for him; he’s my son. I’m proud of him,” Wright said. “I’ve got five biological kids. They all make mistakes and bad choices. I haven’t stopped loving any of them.

“He made mistakes. He made bad choices. I’ve got kids who listen to their friends. He listened to those around him. I did not disown him.”

Asked if he had spoken to the President, Wright said: “Them Jews aren’t going to let him talk to me. I told my baby daughter, that he’ll talk to me in five years when he’s a lame duck, or in eight years when he’s out of office. …

“They will not let him to talk to somebody who calls a spade what it is. … I said from the beginning: He’s a politician; I’m a pastor. He’s got to do what politicians do.”

Wright also said Obama should have sent a U.S. delegation to the World Conference on Racism held recently in Geneva, Switzerland, but that the president did not do so for fear of offending Jews and Israel.

“Ethic cleansing is going on in Gaza. Ethnic cleansing of the Zionist is a sin and a crime against humanity, and they don’t want Barack talking like that because that’s anti-Israel,” Wright said.