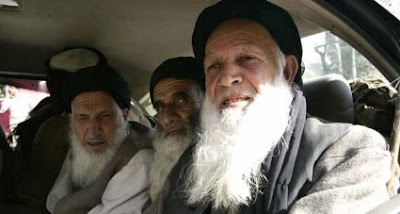 S.Mohammed: Where I and the rest may be, I’ll never tellPakistan plays ‘wack the mole’ with the plethora of pious Muslim sharia supporting terrorists in its northern regions. It’s all a matter of who outlasts who. These tradtional Muslims show no signs of giving in to a secular government, and no matter what the Islamabad government says or does, it will do little in changing their perspectives on sharia and the role Islam should play in their region. In other words, the cycle of Islamic violence will continue. KGSPakistan arrests senior Islamists

The arrests took place during a raid on a religious seminary following a tip-off security forces received. Sufi Mohammed is the father-in-law of the Taliban leader in the troubled Swat region, Maulana Fazlullah.

He is also the founder of a banned militant group, Tehrik Nizam Shariat Mohammadi (TNSM). He negotiated the peace deal imposing Islamic law in Swat, which fell apart when Taliban fighters moved into neighbouring districts.

The security forces detained Sufi Muhammad’s deputy Maulana Alam, his spokesman Ameer Izzat Khan, and another aide, Syed Wahab, during the raid, it said. The statement said three Afghan nationals were also arrested in the raid.

The whereabouts of Maulana Sufi Mohammad are not known.