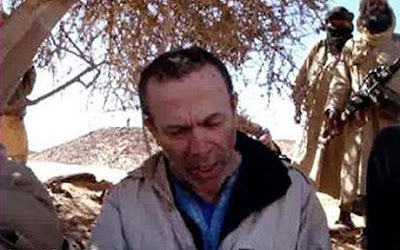 In the arms of Islam, Edwin Dwer hadn’t a chanceGo ahead and call it an atrocity perpetrated by Al-Qaida thugs, but the Tundra Tabloids will look at this latest outrage as just another “business as usual” act by pious Muslims waging their jihad against the infidel. Though some in the Muslim community might say that this recent murder doesn’t reflect true Islam, don’t expect any of these ‘moderates’ to prove beyond a shadow of a doubt that it doesn’t reflect true Islam. Because they can’t. KGSH/T: GaiaAl-Qaeda kills British hostage Edwin Dyer,
kidnapped in Mali after music festival

A British man being held hostage in Mali has been executed, his captors said today, prompting strong condemnation from Britain of a “barbaric” act. Edwin Dyer was one of four European tourists kidnapped on January 22 as they returned from a music festival. Messages posted on Islamic websites indicated that they were being held by Al-Qaeda in the Islamic Maghreb (AQIM), a 300-strong Islamist terror group that operates in the desert borderlands of Mali, Algeria, Niger and Mauritania. Despite intense behind-the-scenes negotiations by British and local officials in Mali, the hostage-takers claimed that they had carried out their threat to kill Mr Dyer.

Gordon Brown said there was “strong reason” to believe that this was true. “I utterly condemn this appalling and barbaric act of terrorism,” the Prime Minister said. “My thoughts are with Edwin Dyer’s family. I offer them the condolences of the whole country.”

Mr Dyer, who had been working in Austria and spoke fluent German, was on holiday in West Africa with German travel operator Oase Reisen. He was abducted, along with Warens and Gabriela Greiner, a Swiss couple, and Marianne Petzold, a German woman, near the border with Niger after attending the Festival In The Desert, a celebration of music and nomad culture at Anderamboukane in Mali.

Their convoy of 4×4 vehicles was ambushed by armed men, who shot out the tyres of the first car, containing the four tourists. A second jeep containing three more tourists was hit by bullets, but the occupants were unhurt and the vehicle managed to do a U-turn and escape.

The hostage-takers then carried out a mock execution, firing a gun a bare inch from the head of the tour cook who had been travelling in the first vehicle, to show their deadly intent. The cook later managed to escape and describe the incident.