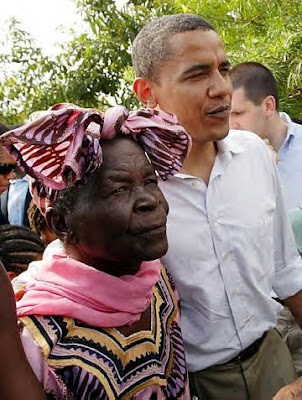 It would be safe to believe that there’s a
Christian grandson and Grannie in the pictureBut there’s nothing believable about this Manchurian president, who has consistently shown himself to be the person that we (who knew better) knew he wasn’t. I first got wind of this over at Pamela’s Atlas Shrugs, then over at Sheik Yer’mami. This is an ongoing story of interest, because it’s terribly difficult to get Barack Obama’s relatives to agree upon anything concerning his youth, and then stick to their versions of the story.Obama’s relatives can’t even stick to the versions about their own lives, Grannie Obama stated that she was a Christian, not a Muslim, but according to Julia Gorin, Grannie Obama is heading for the Hajj, which certainly is a peculiar place for a Christian to visit if she values her life. So which is it? Gorin: Remember angry Grandma? The one who last year was saying she didn’t appreciate the “rumors” being spread about her step-grandson, Barack Obama, namely that he is secretly a Muslim? “Untruths are told that don’t have anything to do with what Barack is about. I am very against it,” Sarah Obama said. Something else she said at the time was that she too was a Christian. Well that seems to have changed, or been a lie. In a report earlier this month, WND has her as a known Muslim:President Barack Obama’s paternal grandmother, Sarah Obama, will reportedly perform the Muslim Hajj pilgrimage this year along with her son Syeed Obama.
A private Kenyan television channel, quoted extensively by the Kenyan and Pakistani media, reported Sarah Obama and her son will also visit Dubai before going to Saudi Arabia for performing Hajj. The pair lives in Kenya. The News, a newspaper in Dubai, confirmed the report. It quoted United Arab Emirates’ property tycoon Sulaiman Al Fahim as stating he will personally sponsor Sarah Obama’s trip after meeting the elderly Obama in Kenya last week and learning she had always wanted to perform the Hajj.…The Hajj is the largest annual pilgrimage in the world. The fifth pillar of Islam requires every able-bodied Muslim to travel to Mecca at least once in their life in a demonstration of solidarity with fellow Muslims and in an act of individual submission to Allah. Obama’s grandmother, a Muslim known locally as “Mama Sarah,” lives in Kogelo, a tiny village near the Ugandan border. She was in Washington, D.C., in January for Obama’s swearing-in ceremony.So we know she lied about who she is. And one day we’ll find out if she also lied about who her grandson is. In any case, Christianity and Islam seem rather interchangeable in the Obama family. Especially if, after being partly raised Muslim, the “church” that one gravitates to is an anti-white, anti-Jewish, anti-American one. Not much of a leap back from there. Anyway, while she’s on that Hajj amid millions of Arabs, she’d better watch her back so she doesn’t get swiped into slavery. 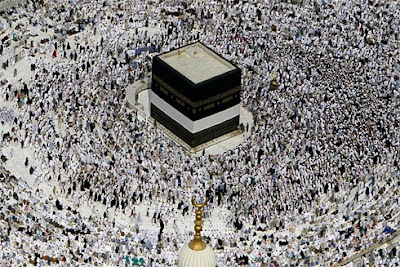