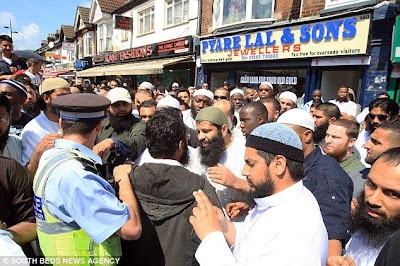 But who can really tell who from who?Before anyone starts popping the cork, what needs to be examined is the discourse between these supposed two camps of Islam. First of all, the labels of “moderate and extremist” are a Western construct, something that Muslims reject amongst themselves as being a false, non-Muslim way of understanding their political/religious system. That said, in order to understand what exactly is taking place in Luton England, it has to be asked whether this is a question of true Muslim “modernists” acting against Islamic fundamentalists, or about Muslims fighting between themselves about the correct way to Islamize British society? The Tundra Tabloids regards Islam’s message of sweet honey laced with arsenic as opposed to it being accompanied with violence, as being the more destructive of the two, and therefore the most dangerous. Islamic terrorism, regardless of its immediate destructive impact, is far less of a worry than the stealth jihad, which focuses on a more benign path to reaching the same goal, that being, a fully Islamized West.Remember folks, it’s what these “moderates are saying and doing” (the stealth jihad), that matters more, than their confrontation in the streets with those Muslims who opt for a more visual expression of what Islam thinks of Western society. KGS
Extremists behind anti-war protest
driven off the streets by moderate Muslims

The Muslim community turned on extremists in their midst yesterday, telling them they were ‘sick and tired’ of their behaviour. The angry confrontation came in Luton, where anti-Islamist protesters brandished England flags last Sunday, before clashing with police.
The latest violence erupted as arguments raged between fellow Muslims shortly after Friday morning prayers in the Bury Park area of the town.
Passing traffic ground to a halt as the large group of moderates confronted about a dozen extremists. As the radical Muslims began to set up their stall, they were surrounded by a crowd shouting ‘we don’t want you here’ and ‘move on, move on’.
Angry words were exchanged and scuffles broke out between members of both groups, with the extremists shouting ‘Shame on you’ and ‘Get back to your synagogue’.
The moderates chanted ‘Out, Out, Out’, and after an uneasy stand-off, police officers were able to persuade the extremist group to leave the area.