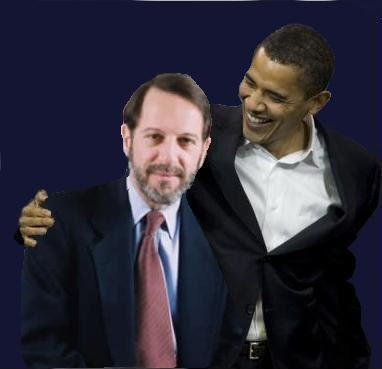 Obama: Ya see Khalid, all your fundraising finally paid off
Normal life in Israeli settlements mustn’t be allowed to continue!
The Tundra Tabloids is not surprised one bit by the Apologizer-In-Chief’s moving US policy towards Israel, to a more Palestinian friendly direction, it mirrors his thinking that’s been shaped by radical Leftism from his early youth. One only has to look at his list of advisers to see why that is so, check what Yid with Lid has to say about it.
Obama has been chummy with some of the most nefarious characters over the years, that “somehow” slipped under the US media’s radar screen, proving that this Manchurian president was never truly vetted by the MSM. Now Obama’s true agenda is laid bare for all to see, he views pressure on Israel as the means to kick start the very dead horse of the Road Map.
Instead of first demanding that the Arabs get their own house in order, respecting human/civil rights, incitment against Jews in all sectors of Palestinian society, …like a drunk looking for his keys near the lampost, Obama chooses the easiest button to push, Israel. Well, he might be finding that button increasingly hard to push. KGS
Obama presses Israel, Palestinians on West Bank

WASHINGTON (AP) – Gingerly trying to advance Mideast peace, President Barack Obama on Thursday challenged Israel to stop settlement construction in the West Bank on the same day the Israelis rejected that demand. Obama pushed Palestinians for progress, too, deepening his personal involvement.
“I am confident that we can move this process forward,” Obama said after meeting with Palestinian President Mahmoud Abbas at the White House. The president said that means both sides must “meet the obligations that they’ve already committed to”—an element of the peace effort that has proved elusive for years.
Earlier in the day, Israel rejected blunt U.S. requests to freeze Jewish settlement construction in the West Bank, a territory that would make up the Palestinian state, along with the Gaza Strip, as part of a broader peace deal.
In strong language, Secretary of State Hillary Rodham Clinton had said Wednesday that Obama wants a halt to all settlement construction, including “natural growth.” Israel uses that term for new housing and other construction that it says will accommodate the growth of families living in existing settlements.
Israeli spokesman Mark Regev responded Thursday by saying some construction would go on.
“Normal life in those communities must be allowed to continue,” he said, noting Israel has already agreed not to build new settlements and to remove some tiny, unauthorized settler outposts. Regev said the fate of the settlements would be determined in peace negotiations with the Palestinians.