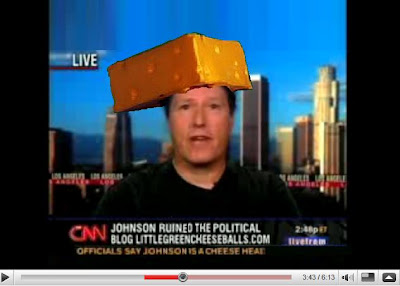 Chas Johnson: In order to further malign the Flemish political party Vlaams Belang, I’ll jump to any chance to prove that Jews are insecure about its openly pro-Israel and philo-semetic stance, like including a statement from a female Belgian Jewish student who’s negative towards the VB, but who’s also fully insecure about the entire Belgian government, media and the Belgian population.

That’s the twisted and/or short sighted logic of Charles Johnson. Either CJ didn’t take the time to read all of what Stephanie Maneles wrote, or he just couldn’t see the immense hypocrisy in using her as an example of Jewish concerns over the VB, when she is clearly highly sceptical over the entire political establishment in Belgium. LGF provides in a recent post something that supposedly lends credibility to the notion that, the Counterjihad has aligned itself with nefarious European political parties that are using the movement to gain national and international credibility.

According to Charles Johnson’s logic, the British National Party (BNP) -which is not in anyway associated with the Counterjihad movement- supposedly offers a window into the thinking of the Vlaams Belang. Supposedly, the ‘strategy of entryism’ is the vehicle by which a fascist party will gain local support for its views which will help propel it into national political power.

By providing a disingenuous message to the public involving the feigning of moderation to its ‘former intolerant views’ while offering support for both Jews and Israel, their xenophobic characteristics and true agenda will be masked, only to be later revealed once they attain high office. But whatever the BNP’s true agenda actually is, it has nothing to do with the Vlaams Belang, which has long been on record for its support for local Jews, as well as maintaining the highly unpopular political view that Israel is not, and has never been the problem in the ME region, but radical Islam. More on Dewinter here at Atlas.

So in an LGF post on the BNP, Johnson quotes (cherry picks) from an article by Belgian Jew, Stephanie Maneles, who’s highly critical about the VB, but leaves out the following:
“Belgium – a place where it is not only acceptable to hate Jews, it is recommended.” (Stephanie Maneles, étudiante en sociologie à l’Université de Brandeis)”

Some may call it paranoia; others will say the fear is rational. Whatever the case, one thing is certain: a growing number of Jews in Belgium feel threatened because of their religious affiliations. These feelings have been caused by the biased media, partial politics, and more generally established xenophobia among the Belgian population. But these feelings of fear, which some dismiss as paranoia, are at the root of an increasing number of violent acts of anti-Semitism.
Like what, you ask’ Notable examples are Ariel Sharon’s trial in Brussels; the intensification of radical Islamic movements across the country; anti-Israel or anti-Semitic graffiti on walls, buses, and schools; and the increasingly frequent attacks of Belgian Jews on public grounds. Belgian natives will call this fear an over-exaggeration.
(TT: The Vlaams Belang won’t call it an over-exaggeration)
They will claim that the country has been nothing but generous and accepting of Jews since the Holocaust. Still, despite the fact that a hatred of Jews has been largely unexpressed in the years since World War II, Jews in Belgium will unanimously agree that anti-Semitism is now, more than ever before, on the rise.
(TT: Due to Walloon & socialist policies of mass Muslim immigration into Belgium)
The incredible bias held by the Belgian media laid the groundwork for the rise in anti-Semitism. Media outlets’ newspapers, televised documentaries, or even weekly magazines’ persistently cover Israel’s harsh and unfair treatment of poor, helpless Palestinians. Not only does the media choose to abstain from broadcasting about Israeli victims, but it opts to blame Israel’s wrongdoings on the fact that it is a “Jewish state.” Belgians’ disproportionate criticism of Israel and its policies toward Palestinians have made Jews in Belgium feel threatened on a daily basis.
Changing the legal rules
It does not help that the Belgian government not only ignores, but actively participates in, this obvious bias. The most concrete example is the 2003 indictment of former prime minister of Israel, Ariel Sharon. Even though Belgium had no connection to the 1982 Sabra and Shatilla refugee camp massacres ‘during which up to 2,000 people were killed’ the Belgian government felt compelled to indict Ariel Sharon for his role in the bloodbath.
While the Belgian appeals court ruled that Mr. Sharon could not legally be tried in Belgium’ because crimes committed abroad can only be prosecuted if the suspect is on Belgian soil’the Belgian prime minister, Guy Verhofstadt, had different ideas. Verhofstadt said he supported the broadening of the scope of the law by the Belgian parliament so that a war crime could be prosecuted “no matter where the person accused of the crime is located.”
So, not only did Belgian courts choose to try the leader of the only Jewish nation in the world for a crime committed two decades prior to the indictment, but also the entire Belgian justice system was being changed to accommodate such an action.
The Belgian Jewish community saw this as yet another occurrence that vaguely hinted at anti-Semitism without explicitly showcasing it. After all, it seemed like the courts were willing to go to great lengths to find justice for a crime that in no way, shape, or form affected Belgium’s safety or its inhabitants.”

Judging by the university she attends, the woman is clearly a Francophone, and more than likely upset by the secessionist Flemish party’s view’s concerning the Walloons, who have acted as a major drain on the economic engine of the far more productive Flaams. Having stayed in the Walloon portion of Belgium during my participation in the first ever Counterjihad, I can attest to the areas’ over all rundown appearance in comparison to the Flemish areas.
Perhaps Stephanie Maneles’ extreme negative statements about the Flaams Belang, are due to a deep sense of political angst and frustration at the disparity between the two distinct sections of the fake construct called Belgium? Her anger is then compounded by the fact that the VB is on record for being in favor of pulling up the stakes altogether from the Belgian enterprise and becoming a Flemish state in order to handle their own destiny.
Regardless of her reasons however, one thing is for sure, as a Belgian Jew, Stephanie Maneles clearly feels that Jews are being persecuted by the BELGIAN STATE AND ITS MEDIA AND POLITICAL ELITE. She alone will have to reconcile the dilemma she places herself in, correctly believing that the state Belgian state apparatus is overtly anti-semitic, while chastising the only party in Belgian politics that is openly philo-semitic and pro-Israel…for being xenophobic.
We all know the reason behind Charles Johnson’s cherry picking of Stephanie Maneles words, but only she knows for sure why she is truly against the Vlaams Belang. The TT believes it’s more out of anger for the VB’s desire for ending the fake construct called Belgium and for the founding of a Flemish state, while Charles Johnson’s reasons are purely for his own aggrandizement.
What else explains his willingness to use anti-Vlaams Belang material from sources loyal to the anti-semitic/anti-Israel Belgian political/media elite, in order to snuff out the only pro-Israel and philo-semitic political party in Belgium? Great going Chuckie! KGS