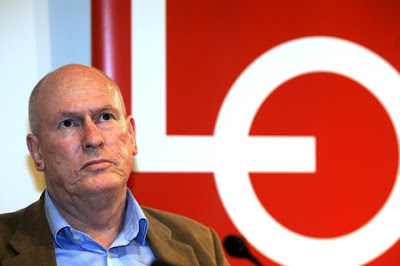 Norwegian Labour Union President Roar Flaathen:
I deem Arabs as being unable to be treated as equals

After reading the Norwegian Labour Union’s press statements in the Haaretz article, one could safely conclude that Roar Flaathen truly believes that the Arabs are in fact…children, and therefore unable to be held accountable for their adult actions. It’s a truly bigoted view of the Arab world that is held by these doughy-headed socialists, who most certainly deem the Arabs as inferior to that of people from Westernized developed nations.

I can’t see a clearer example of a Leftist harboring racist views of Arabs, and the punch line is, that he (Flaathen) and other like minded individuals that hail from the Left, will get away with it, because on the surface, such thinking appears to be sympathetic, but in practice, it’s the very same thinking Whites had about Blacks in a segregated South in the US.

Leftists get to practice open racism on a daily basis without ever being taken to task for it, whether it be labour union leaders, politicians, the media or in the academic community. what they are effectively saying is that one shouldn’t hold certain ethnic, racial or religious groups to the very same high moral standards that the West itself adheres to, because they are unable to meet those high standards.

Some would say that such thinking would be akin to treating a human being more like an animal, than as a child, seeing that a child can be to some extent reasoned with. No, these Leftists and others who buy into their racism, would have you believe that ”others” are simply not up to the task in comprehending in the same way, so they have to be treated differently.

The Norwegian LO union is heavily pro-Palestinian, but the Palestinians are not considered their equals, but as just one more group of childish Arabs to patronize under the banner of ”Western aid”, doling out to them assistance like a parent would hand out lunch money or a weekly allowance to a child. KGS

By Haaretz ServiceNorway’s largest labor union urged the Scandinavian country on Saturday to lead an international boycott of Israel if it did not reach a peace agreement with the Palestinians.

The Norwegian Confederation of Trade Unions, whose members constitute more than a third of the country’s employees, said in a statement that both Israel and the Palestinians deserve to live in peace and security, and as long as this was not achieved, the Israeli government was to be held accountable.

The organization urged Israel to put an end to the “illegal occupation,” respect the 1967 borders, halt the expansion of the settlements and remove the security barrier.

The UN should play a proactive role to this end, and if these efforts fail, the Norwegian government should lead an international campaign against the occupation of the Palestinian territories, the statement further said.

Note: Ironically Israel is one of the few states that actually treats the Arabs as equals, by demanding from them to live up the agreements that they have signed, as well as to answer for the crimes that they commit, instead of like the West that looks between its fingers and then blames others for the actions of their pet cause.

Note: Perhaps the Lefts’ familiar labeling of the Gaza Strip as an open prison or zoo, actually reveals their true feelings and understandings of the Palestinians, who are not actually people, but animals.