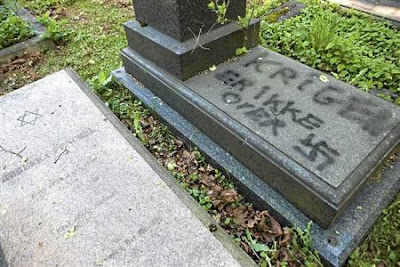 An anonymous source sends the TT a URL link to the Norway, Israel and the jews blog, which is also contained a link to an AFP article by a commentor called Paula.

“The jewish cemetery in Oslo has been vandalized, again. A representative from the Mosaic Religious Congregation in Oslo states that there is no need for excessive publicity, as the vandalization was “amateurish”. This attitude is slightly similar to that of the Egyptian Copts. All publicity appears to lead to increased hostility, so as much as possible must be borne in silence. Yet the fight against anti-Semitism must not be left to the jews alone. It is absolutely necessary for Norwegian society to join ranks and protect all groups of society against harassment.

From Aftenposten today, May 15th 2009:
The jewish cemetery at Sofienberg in Oslo has been vandalized. Nazi-symbols have been painted on several graves.

The desecration was discovered on Thursday, and the Mosaic Religious Community has reported the case to the police, the NRK (State news agency) reports. On one of the gravestones it now says “The war is not over”.The jewish cemetery at Sofienberg church was established in 1869 and was in use up to 1917. The cemetery is today a protected heritage site.

Pamela at Atlas believes that it could be the work of Muslims, but that in the end it’s all the same, and that the media will never refer to it as Muslim anti-semitism, regardless of the facts.

The Jewish graveyard in Sofienberg Oslo has been vandalised. Many graves have had Nazi symbols painted on them. The vandalisme took place on Thursday. The case has been reported to the police. On one of the gravestones “The war continues” was written.

Either way, it’s the same thing. — it’s despicable. And the world permits it. The police prefer ‘neo-nazis’, they will never say it is Islamic anti-semitism.

OSLO (AFP-EJP)—The Jewish section of an Oslo cemetery was desecrated with swastikas and graffiti painted on headstones, Norwegian media reported on Friday.

Television images showed black swastikas and the phrase “The War is Not Over” painted on a number of tombstones at the Sofienberg cemetery, which was used between 1869 and 1917 and is considered a heritage site.

Some 1,300 Jews live in the Scandinavian country out of a total population of around 4.8 million.
In March, Norwegian Jewish leaders reported a dramatic increase in anti-Israel and anti-Semitic sentiment in the country following the Israeli operation in Gaza, accusing the Norwegian media and intellectual elite.

During the war, Olso, the Norwegian capital, was fraught with violent anti-Israel demonstrations. Numerous government officials decried Israel’s actions in Gaza and during a march against the operation shouts of “Death to the Jews” were heard.