No matter how insanely stupid and bigoted it is
Remember folks, Muslims believe that they can’t ever be anti-semitic, especially when it’s the words of their bigoted prophet, Mohamed that they’re quoting. We dhimmis are expected to just shut up and be tolerant of anything that they throw in our way, remember the supremacist complex that they have…..learn to be tolerant of it. KGS 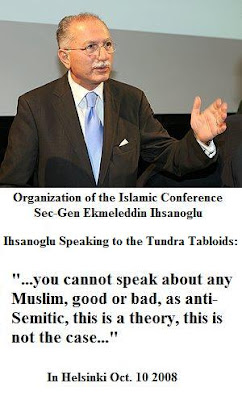 All pigs alive today are descendants of the Jews who were turned into pigs by Allah, according to a senior Egyptian religious leader. Since all pigs are descendants of Jews, it is obligatory to kill all pigs, says Sheikh Ahmed Ali Othman.

Presumably if pigs were merely animals, they would not face destruction. It is their Jewish ancestry that condemns them to death.

The Jordanian newspaper Al-Hakika al-Dawliya adds that this is not the only opinion. It cites Sheikh Ali Abu Al-Hassan, head of the Fatwa Committee at Al-Azhar [Sunni Islamic university], who believes that all the Jews who were turned into pigs by Allah died out without reproducing, and therefore there is no relationship between today’s pigs and Jews.

The following is the transcript from Al-Moheet Arab News Network:

“CAIRO — Sheikh Ahmed Ali Othman, supervisor of the Da’awa [Islamic Indoctrination] of the Egyptian Waqf [Islamic Holy places], has issued a Religious Ruling (Fatwa) that pigs in our time have their origins in Jews who angered Allah, such that He turned them into monkeys, pigs, and Satan-worshippers, and it is obligatory to kill and slaughter them [the pigs].

Othman based his ruling on the respected Quranic verse, ‘Say [to the People of the Book – Jews and Christians], Come and I shall make known to you who receives the worst retribution of all from Allah: those whom Allah has cursed and upon whom He has poured His wrath, whom He has made into monkeys and pigs, and who have served abominations. Their place is worst of all, and their deviation is the greatest of all…’ (Quran, sura 5, verse 60)

Sheikh Othman noted that this verse concerning the nation of the prophet Moses descended [from Allah to the Quran], and the books of commentary confirm this. There are two opinions among the Ulama [Islamic scholars] in this regard: The first is that the Jews, whom Allah transformed and turned into pigs, remained in that state until they died, without producing descendants. The other opinion is that the Jews who turned into pigs multiplied and produced descendants, and their line continues to this day. Sheikh Othman also cited Hadiths (traditions attributed to Muhammad) as support…

The Jordanian newspaper Al-Hakika al-Dawliya quoted Othman: “I personally tend towards the view that the pigs that exist now have their origins with the Jews, and therefore their consumption is forbidden in the words of Allah: ‘A carcass, and blood, and the flesh of a pig are forbidden to you….’ Moreover, our master Jesus, peace be unto him – one of the tasks that he will fulfill when he descends to earth is the killing of the pigs, and this is proof that their source is Jewish.

Sheikh Othman said that whoever eats pig, it’s as if he ate meat of an impure person, and stressed that this Religious Ruling is backed by the Islamic Sages of Al Azhar, but they are afraid to say this publically… so the Sages won’t be accused of Anti-Semitism.

Sheikh Ali Abu Al-Hassan, head of the Fatwa Committee at Al-Azhar [Sunni Islamic university], said that the first view is accurate, because when Allah punishes a group of people he punishes only them. When Allah grew angry with the nation of Moses, He turned them into pigs and monkeys as an extraordinary punishment… but they died out without leaving descendants.”