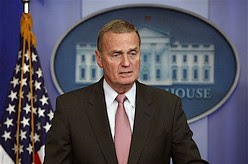 NSA James Jones: This is what we tell
each other every morning in our staff meetings

Breathtaking. This is like a clueless adult leaving a troublesome underage kid alone in the house with enough matches and kerosene to blow everything up and taking the neighborhood with him, all in the name expediency. It’s a classic case of placing the cart before the horse. It will take years, if not decades for the Palestinians to return to some sense of normality that will enable them to value the building a decent state for themselves more, than destroying the Jewish one that already exists.

And so, Obama’s Chief of Staff, Rahm Emmanuel gives the Jews an offer that they can’t refuse, in order for the US to get serious about Iran, the Israeli’s will have to get serious about the Palestinians. What this amounts to is, forcing Israel to commit suicide in the short term to save Israel in the long term, while insisting that only dialogue will secure a peaceful Middle East, in spite of Iran refusing to budge from its long calculated march towards obtaining a nuclear weapons capability. That is what one can expect from an Obama administration. ´Just thought you should know. KGS
‘Iran boosts need for 2-state solution’

In an interview with ABC television, Jones said that the US government agrees with Jerusalem that Teheran’s nuclear ambitions pose an “existential threat” to Israel.
“We understand Israel’s preoccupation with Iran as an existential threat. We agree with that,” the senior official was quoted as saying by AFP. However, Jones went on to stress that the Iranian threat only reinforces the need for peace in the region.
By the same token, there are a lot of things that you can do to diminish that existential threat by working hard towards achieving a two-state solution,” he reportedly said.
“This is a very strategic issue. It’s extremely important. And we’re looking forward to having a good, constructive dialogue with our Israeli friends when they visit Washington in the next seven or eight days,” Jones said in response to a question about Prime Minister Binyamin Netanyahu’s upcoming visit to Washington on May 18.
In a closed meeting with AIPAC’s major donors last week, Obama’s chief of staff, Rahm Emmanuel, reportedly said that America’s ability to face Iran depended on Israel’s ability to make progress with the Palestinians.
He also reportedly told them that solving the conflict would enable progress in dealing with the main threat of Iran. However, senior Israeli officials have rejected linking the Iranian nuclear issue with the Middle East peace process.