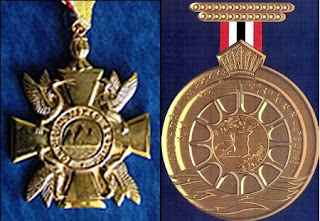 It’s offensive to Muslims and Hindus!Caribbean storm: The old Trinity Cross (left) is replaced with the Order of the Republic of Trinidad and Tobago, which has removed any Christian symbols
Just wait and see, Britain will be soon renouncing all of its Christian heritage for the sake of not offending anyone. The next King has already been pining for the title of “Defender of Faiths” in place of the traditional “Defender of the Faith”, so the change in the honorary title of the Queen’s medal shouldn’t come as a surprise. KGS
Queen’s Trinity Cross honour
deemed unlawful by Privy Council

An honour established by the Queen has been declared unlawful after Muslims and Hindus complained that its Christian name and cross insignia were offensive.

The Trinity Cross of the Order of Trinity was established by the Queen 40 years ago to recognise distinguished service and gallantry in the former colony of Trinidad and Tobago. It has been received by 62 people including the cricketers Garfield Sobers and Brian Lara, the novelist V. S. Naipaul and many of the islands’ leading politicians and diplomats.

The Privy Council in London has ruled that the decoration is unconstitutional because it discriminates against non-Christians. Five British law lords said that the creation of the honour breached the right to equality and the right to freedom of conscience and belief. The implications of the ruling on British decorations are being studied by lawyers at the Cabinet Office, which oversees the honours system. A spokesman said: “We have noted the judgment and are monitoring the situation.”

A parliamentary review of British honours has already recommended streamlining the system with new titles that have no reference to Christian saints or symbols.

Hugh Peskett, editor-in-chief of Burke’s Peerage and Gentry, said that changing the names of titles to remove their Christian references would destroy hundreds of years of history. “Part of the significance of an honour is its antiquity and I can see no reason why they should be changed,” he said.