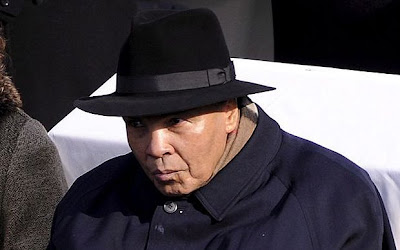 Thrilla in Manilla, the Mohammed Ali documentary:
“Mohammad Ali’s pronouncements on race, came directly from the Nation of Islam, who believed in the separation of the races because all white men were blue eyed devils.”
The Tundra Tabloids has always had a mountain of respect for both Joe Frazier and George Foreman, with the latter having the best record of all three, 76-5. Mohammad Ali will never get that same respect….never, due to all of the hate and anger he fostered at the behest of his racist, supremacist religion. Hopefully this film goes a long way to unwind the myth that surrounds this most divisive of American sports personalities. KGS
Thrilla in Manilla
A film by John Dower
David Forsmark writes a review of the movie in Front Page Mag:

Why the accolades for Muhammed Ali? Ali was the person most responsible for ruining his sport, Don King would be nothing without him. What is he a symbol of? Bad sportsmanship? Taunting an opponent?The Nation of Islam? Anti-miscegenation? Racial hatred?
Ali is no Jackie Robinson; in fact, he was quite the opposite. Frazier is what Americans look for in their champions, so much so that Sylvester Stallone lifted elements of Frazier’s humble story directly for Rocky. But as a lasting tribute to media fecklessness, in Philadelphia there stands a statue of the fictional Rocky, not of Smokin’ Joe Frazier.
But while everyone seems to describe him with the word “bitter,” Frazier comes across as anything but. Joe seems completely at peace with his justified contempt for Ali as a man. In that way, Frazier is a throwback to a pre-therapeutic age of manliness when everyone didn’t have to have a group hug in order to be content with the order of things.
That’s appropriate, since Joe Frazier was also a throwback as a champion — a gracious, good sport who respected his sport and his opponent — and who was unprepared for an age where heroes werecreated by a media agenda instead of by an individual’s actions. More here.

NOTE: Check out the 5 min trailer to the movie here.