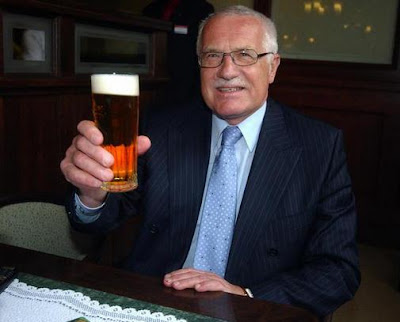 Czech President Vaclav Klaus:
Go ahead and pat yourselves on the back,
it is I the President who has the final sayThe only few bright spots to the whole scenario, are the presidents of both Poland and the Czech Republic, who are fierce anti-Lisbon Treaty/EU Constitution critics. The Lisbon Treaty is a scam and a power grab by the EU elites who want to rule by fiat under the guise of democracy. This is the same EU that showed its contempt for democracy by walking out on the Czech president while he was addressing the EU parliament. Payback might indeed be a bitch. KGS

PRAGUE (AFP) – The European Union’s troubled Lisbon Treaty won the endorsement of Czech senators Wednesday, leaving an Irish referendum as the last big stumbling block to a major reform of the European Commission.

“The Czech Senate decided today after a discussion that had taken about a year and three months,” Senate chairman Premysl Sobotka told reporters.

Senators in the Czech Republic, the current holder of the European Union presidency, approved the text designed to streamline decision-making in the EU with 54 votes against 20.

The future of the text, which must be ratified by all 27 EU members to take effect, now depends largely on Ireland, which will hold a second referendum on the text by November, following its rejection by voters there last year.

The outcome of the Czech ratification depends on the country’s eurosceptic President Vaclav Klaus, a fierce opponent of the treaty, who must add his signature to the text to complete the process.

Klaus has said he would delay the signature beyond the Irish referendum, following the example of Polish President Lech Kaczynski, who is also reluctant to sign the text despite its endorsement by the Polish parliament.

“The Czech government and parliament cannot wield any influence whatsoever on the president. He is free to decide as he wishes,” said Sobotka.

Despite the unclear future, the treaty’s supporters welcomed the result.