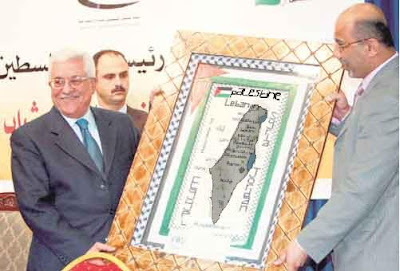 Mahmoud Abbas: We all fly BMI,
we have a lot in common!
To explain the above picture: “A handout photograph supplied by the Palestinian Authority on Monday shows President Mahmoud Abbas being presented with a large framed map of ‘greater’ Palestine, which shows a future Palestinian state where the current state of Israel is situated, and does not include a ‘Green Line.’ The president was given the map when he spoke at a Conference of Parliamentary Palestinian Youth in the West Bank town of Ramallah.”
When BMI isn’t busy enforcing oppressive Islamic garments on its flight attendants, it’s scurrying around for lame answers to fend off claims of anti-Israel biases die to its inflight entertainment system that wipes Israel of the map. You see, it’s not just an “Iranian, Hezbollah or a Hamas/PLO thing” to deny the existence of Israel, it’s an ISLAMIC THING to deny the existence of the Jewish state.
The overwhelming majority of the Islamic world holds negative views about Jews, and that of course is especially so for Israel, the lone Jew state. When the Iranian leader talks of wiping “Israel off the map”, the majority of the Islamic world, Sunni and Shi’ite, clap their hands and nod their heads in agreement. KGS
Wiping Israel off Brit airline’s map stirs furor

(AL-AFP, AlArabiya.net) Angry Israeli passengers complained to British BMI airline that the Jewish state was wiped off the inflight map, which showed flights bound for Israel were instead heading to Mecca.But the airline denied any anti-Israel agenda and insisted there was a simple explanation: the planes were recently bought from a bankrupt charter company that flew mainly to Muslim countries.”
For this reason the inflight entertainment system in the two planes was made to adapt to the passengers flying to and from those destinations and therefore the map showed mainly places holy to Islam,” BMI said in a statement.
[…]
But after furious passengers took up the issue with the authorities, an Israeli official made it clear that either the Jewish state appears on the maps or BMI disappears from its skies.”Doing business with Israel has its advantages and disadvantages, but we will not agree to a situation where they hide the existence of Israel but want to do business with Israel,” transport ministry director-general Gideon Sitterman told army radio.
“I intend to contact BMI chairman Nigel Turner in London and ask for some clarifications… it is unacceptable that we are wiped off the map,” he said.Foes of the Jewish state, including Iranian President Mahmoud Ahmadinejad, have called for Israel to be “wiped off the map.”