Kind of Jordan: “America is providing a new image of how things should be done
and I think the world has a belief in the president” 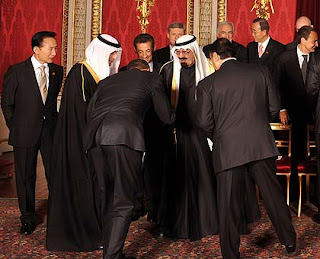 Translation: “America is now acting as it should and
the Islamic world finally has a believing US president”Just to clear things up, the king of Jordan owes his throne to the victorious allied powers of WWI, making his office, truly the last vestige of Western influence in the region. For all the hubbub about Israel being a product of Western imperialism, the kingship in Jordan was a British concoction to placate the Arabs, especially Jordan, which received a major slice of the area called Palestine (it was originally allotted for the Jewish homeland). In return for not making things ill for the region once the Jewish state became a reality, Trans-Jordan got a king and a state, which has over 75% of its people identyfing themselves as Palestinian.The King of Jordan reneged of course, and joined in on the attack against the nascent Jewish state once the British left the area. Now the present day king wants to ensure that Jordan doesn’t get stuck with the disputed territories once again, and wants to pressure Israel into a foolhardy “peace deal with a people who have no intention of ending the hostilities, even if they get a sovereign state of their own.

Barry Rubin: “… the fact that Hamas rules the Gaza Strip is no Israeli rationale for refusing concessions but a huge fact of life. How can Israel make peace with “the Palestinians” when the PA has no such mandate? And how could Israel make peace with a Fatah-Hamas PA regime when such a coalition’s effect would not be to moderate Hamas but to make Fatah even more radical.It’s silly to assure Israel that peace will bring it greater security when it’s unclear whether the Palestinian government would be taken over by Hamas; wage another round of warfare; fire missiles and be “unable to stop” cross-border attacks; and invite in Iranian or Syrian troops. That king of two-state solution would be far worse than the status quo. More here.

Not only that, one has to remember that after the Oslo fiasco, then Israeli Prime Minister, Ariel Sharon, chose to fundamentally change Israel’s policies vis-a-vis the Palestinians and proceeded with the speedy building of the anti-terror security fence. The emphasis would no longer be based on Oslo’s “peace first”, but on Israeli security.Though the Palestinians have succeeded in launching a dirty war of rockets upon Israeli civilian centers, a war crime, Israel has indeed obtained a greater measure of security than it had during the Oslo years. The fence has worked wonders in restraining jihadi murderers from carrying out their suicide attacks (mini genocides) inside Israel. While being far from perfect, it reflects a more realistic approach to the complete lack of will on the side of the Palestinians to end the conflict once and for all, than what passed for “sound logic” during the Oslo years.News for the king of Jordan, without a fundamental change in the Palestinian body politic, the region will indeed see more conflict, but none of Israel’s choosing. Israel doesn’t need a “hudna” or unilateral cease fire, the fighting stops once the Arabs put down their rifles and start to look after themselves and leave the Jews alone. The words of the king are frightfully stupid as they are naive, and what’s worse, we now have a US president willing to believe them. KGS