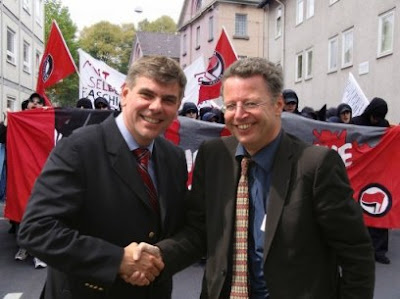 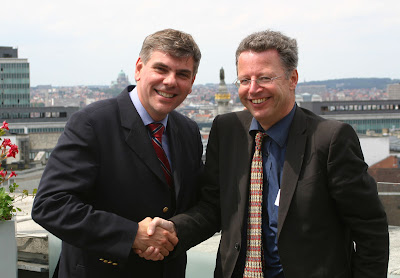 NOTE: Chuck is already on his cycle, his “spin cycle” that is, saying that:”Which one is the real photo and which is the altered one? It’s not obvious from examining the pictures, but clearly, one of them was altered. But it’s a meaningless distinction. The point of posting the photograph was not to show Filip DeWinter of the Vlaams Belang and Markus Beisicht of Pro Koln in front of a demonstration — it was very obviously to show that they are associates.”He can’t even admit that the one with the flags behind Dewinter is in fact the fake, and then says it is a “meaningless distinction”, since its the relationship he was trying to prove. OK CJ, how about trying to do it with a real photograph then?HAHAHAHAHAHAHAHA UPDATE: Spencer adds: The top photo shows Vlaams Belang’s Filip Dewinter with Pro-Köln’s Markus Beisicht in front of what appears to be a neo-Nazi demonstration. (Actually the banners are from Antifa, Antifascistische Aktion, a violent Leftist group.) That’s the photo Johnson ran. The only problem? It’s a fake. The second photo is the real one: Dewinter and Beisicht on the roof of the Flemish Parliament in Brussels.Exactly Robert, I remember the scene well during the Brussels Counterjihad conference. That is exactly the place, I remember that courtyard leading from the dining hall. KGSUPDATE: Apparently columnist and blogger, Michelle Malkin, has fallen from grace in the view of the “lidless eye”, and is now threatend by LGF’s Charles Johnson with retribution for linking to the Spencer story about the faux photo run by LGF. Malkin ran the following: