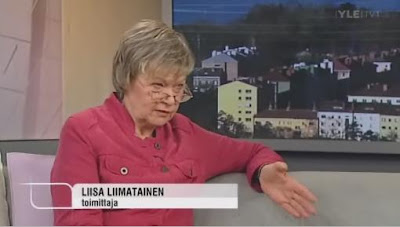 You can’t make this stuff up. Finnish journalist, Liisa Liimatainen, was interviewed today on the state broadcastor’s (YLE) morning program, in which she was spoke about her new book on Iran, as well as yesterday’s events in Geneva. Apparently her ten years spent with Iran hasn’t tought her much about the high importance Islam has on the thinking of the ruling mullocracy.
Liimatainen refers to the criticisms Ahmadinejad has received from conservatives in the government, but fails to admit that these very same leaders have called for Israel’s destruction as well. No matter which way you slice it, the mullocracy running Iran, at least those who hold key positions, desire for Israel’s destruction, and believe the “hidden Imam” is soon to return.
Liimatainen refuses to place much, or no emphasis at all on the religious fanatacism of Iran’s leaders, that will cause them to act irrationally in the opinion of the West, but very logically according to their version of the end of days. She simply misses this altorgether, through ignorance (hardly) or by choice (most likely).
Writer: U.S. relations behind Ahmadinejad speech brouhaha

Iran, a book written by journalist Liisa Liimatainen says that the U.S. should change its Iranian policy. Poor countries’ relations also explain president Mahmoud Ahmadinejad’s Monday speech, which caused the EU countries to march out of the UN meeting.
YLE’s Anikka Damström: How much can you blame on Ahmadinejad for the kind of statements against Israel, that got the whole EU delegation to march out of the conference, that surely can’t help it’s international standing?
Liimatainen: Well you first have to differentiate Ahmadinejad and a very complicated Iran which is the back drop. Iran is soon to have elections, and the arch-conservatives have seriously criticized Ahmadinejad and his politics, first his economics and then his foreign policy. Then the other thing in the background, is that the US has to change is politics, which this new president is changing.

Check out the video in Finnish which is still available. (22 min. mark) KGS
NOTE: Barry Rubin turns Liimatainen’s understanding of Iran on its ear. Rubin has it right.
Ahmadinejad’s Wager, The World’s Peril

Why did Iranian President Mahmoud Ahmadinejad, with the full backing of Iran’s regime, behave as he did at the Durban-2 conference? One reason, of course, is that he believed every word he said, and much of the Iranian Islamist regime thinks the same way. This factor should always be remembered, lest people think this was only some cynical ploy.

As the Iranian Islamist regime’s founder, Ayatollah Ruhollah Khomeini, once said, the revolution was not just about lowering the price of watermelons. That is, this was not merely a movement for materialist reasons but one that believes it was executing God’s will on earth. Ideology was central.

To explain this properly, permit me to digress a moment. People often ask: why did Jews under Nazi rule in Eastern Europe flee or do more to escape the Shoah (Holocaust). After extensive research and interviewing, it is clear to me that while there were a number of factors but foremost was the disbelief that the Germans would murder them all.

Remember that these Jews were forced into slave labor. They produced goods, farmed crops, and repaired roads. In effect, they were helping the German war effort. These laborers were paid nothing and fed barely enough to stay alive. Why, then, would the Germans destroy, so to speak, a goose that was laying eggs if not necessarily golden ones, possibly losing the war in the process?

The answer is: because they believed in their own ideology they would not act pragmatically but rather make their own defeat-and own deaths-more likely.

The second factor that should be remembered is that of miscalculation. A leader, particularly if reckless and overconfident, will take an action he thinks is in his interest but turns out to be a disaster. The best internal Middle East examples are those of Egyptian President Gamal Abdel Nasser provoking the crisis that led to the 1967 war and Iraqi President Saddam Hussein’s invasion of Kuwait in 1990.

Nasser thought he could score points in the Arab arena and at home by threatening to wipe Israel off the map and taking at least some major steps toward war. He miscalculated. Israel attacked and inflicted a huge defeat on him.

Saddam Hussein thought he could score points in the Arab arena and at home by seizing Kuwait, making himself the Arab world’s leader, plus getting many billions of dollars from that oil-rich little country. He miscalculated. A U.S.-led coalition attacked and inflicted a huge defeat on him.

For Ahmadinejad, then, ideology and miscalculation are major factors. They will continue to be major factors if Iran gets nuclear weapon.

But of course, as with Nasser and Saddam Hussein, there are shorter-run calculations. Three are important:

Domestic popularity. This is always a basic factor with Middle Eastern radical regimes. Not all Iranians will support Ahmadinejad and many hate the regime. But among the 20 percent hardcore and perhaps 50 percent total who can be mobilized, they may cheer Ahmadinejad. Iran is strong, its enemies are weak, and its leadership is courageous. America, the Jews, and the West are satanic. Rally to the Islamic regime!

Regional popularity. Iran’s regime is seeking to be leader of the Muslim world and the leading power in the Middle East. But in doing so it has two very big problems: Iran is mostly Shia Muslim; most Muslims (especially Arabs) are Sunni Muslims. Iran is mostly ethnically Persian; Arabs are Arab. How to overcome these barriers? Iran already has Arab and largely Sunni allies–Syria, Hamas, Hizballah-but that’s not enough. So by becoming the leader against America, the West, and Israel, Iran hopes to override these problems. Who cares if we are Persian and Shia, Ahmadinejad says, we are the true Muslims doing what your governments aren’t doing.

More here. Read it all. KGS