Skip to content
Home
/
2009
/
April
/
21
/
Uncategorized
/
Finnish Film Crew in ABC 20/20 Documentary Direct Jihadi Pirate in Finnish…….
Facebook
Twitter
Google+
LinkedIn
Pinterest
So that’s where all our Finnish Somali refugee males are going,
to rake in the big dough for the jihad! 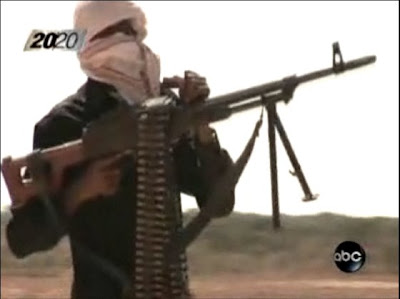 H/T: KumitonttuAt 20 seconds into the two and a half minute film clip, the Finnish director shouts to the jogging jihadi: “ja takaisin samalla lailla, se näytti hyvältä.” (And come back the same way, it looks good).HAHAHAHAHAHAHAHAHAWhat makes the already juicy story of Somali refugees from Finland going back to Somalia to wage jihad and earn a wad of money, while Finnish documentary crew direct them in Finnish, even juicier, is that the cameraman, Jussi Arhinmäki (click for a video of him), is brother to a member of the Finnish parliament, Paavo Arhinmäki, for the Leftist party (Vasemmisto). 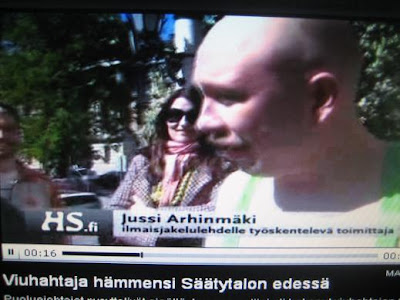 Jussi Arhinmäki dressed like Borat
while waiting for the Finnish PM 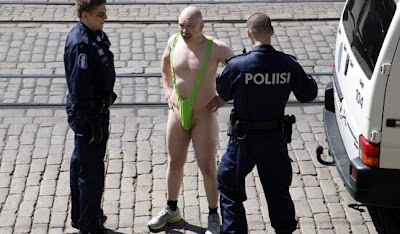 Being led away by the police Finnish blogger Kullervo Kalervonpoika states that:

“John Hakalax and Jussi Arhinmäki have received (in some measure, and for some reason) to film the Somali pirates, and do interviews. Some of the material summarized by the Finns was presented to the American ABC channel 20/20-current affairs program on Friday. Arhinmäki himself, told of his travels to meet with pirates through the aid of Finnish-Somali friend, and surrounded by armed security guards.”

He also goes on to ask the all important question of why didn’t the Finnish film crew ask about how many other Somali refugees from Finland are currently in the area, plying the seas for the jihad? But then again, since they’re directing the subjects they are interviewing…well, I don’t think that the thought would have ever occured to them.Kullervo Kalervonpoika also asks: “On the other hand, it would be also nice to hear what the Member of Parliament, Paavo Arhinmäki thinks of his little brother’s tinkering, and if he is somehow involved in the matter?”BIG QUESTION IS, does ABC 20/20 know about what the Finns did? Has anybody out there seen the documentary in question? Let me know! KGSUPDATE: YLE is denying that the jihadi pirate understood Finnish, stating that: Iltalehti: “Televisio- ja elokuvadokumenttien lainalaisuuksiin kuuluu, että kuvauksia järjestellään ja kuvattaville annetaan myös ohjeita. Esimerkiksi oikean merirosvon vaihtaminen suomea taitavaan näyttelijään ei enää olisi dokumentoinnin sääntöjen mukaista.”Staging scenes is a common practice in making documentaries for television and films. For an example, exchanging a real pirate for an actor with Finnish speaking skills wouldn’t be in accordance with the rules.”Of course it wouldn’t, but you have to admit that the Borat imitator (below) claiming he used an interepreter to communicate to the jihadi, doesn’t exhibit the kind of behaviour one would hope to see in a serious journalist. It’s a question of credibility.