Skip to content
Home
/
2009
/
April
/
20
/
Dhimmitude
/
The Evil has Landed, Swiss President Sucks Up to Ahmadinjad…….
Facebook
Twitter
Google+
LinkedIn
Pinterest
The outrage and shame of it all,
Mertz greeted him at the airport! 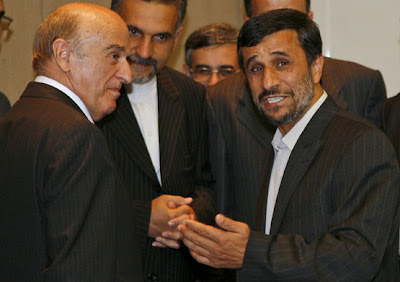 Mahmoud: You see, this is how
a Western dhimmi treats Muslim leaders!

The West sinks and slinks to new lows. Israel however is not amused, and rightfully recalled its ambassador to Switzerland, Ilan Elgar, back to Jerusalem for it’s entertaining the supporter of the genocide of the Jews, Mahmoud Ahmadinejad. Finland and the rest of Europe can suck up to the genocidal president of Iran, but Israel doesn’t have to be present to witness it. KGS

Israel recalls its envoy from Switzerland for consultations

Israel also cited Switzerland’s hosting of a “racist and Holocaust denier who openly declares his intentions to wipe Israel off the map.”

Prime Minister Binyamin Netanyahu and Foreign Minister Avigdor Lieberman issued a joint statement on Monday morning to the effect that Elgar would be recalled as soon as possible for consultations in Jerusalem.

Former Israeli ambassador to Switzerland Aviv Shir-On confirmed that Elgar was on his way to Israel. The message to Switzerland is that the meeting harms the values that Switzerland itself upholds, Shir-On said.

“Switzerland is a country friendly to Israel, but we are not ready to accept any and all actions by our friends,” Shir-On said.