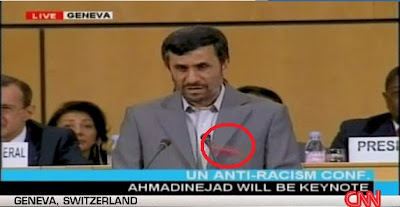 Ahmadinejad called a racist by two men in rainbow wigs
Big Deal
A man in a rainbow colored wig tosses a sponge red ball at monkey man, and a few delegates walk out. What’s more important is the hundreds that stayed and cheered the genocidal racist acomapnied with a thunderous applause. That tells you more what the conference is about than the handfull that left. I don’t see how they can sit and breath the same air with these Jew hating thugs. KGS
Rainbow clown tosses ball at Moodi
Protesters in brightly colored wigs interrupted Ahmadinejad as he began to speak, shouting: “You’re a racist!” in accented English. But some delegates cheered, while security officers dragged at least two protesters from the chamber.

UPDATE: It was accompanied by a mass walk out as well, looks like over 80-120 westerners walked out. But there were over 600-800 more left in the auditorium … cheering. Enough said

Finland’s seat is empty….but for how long? 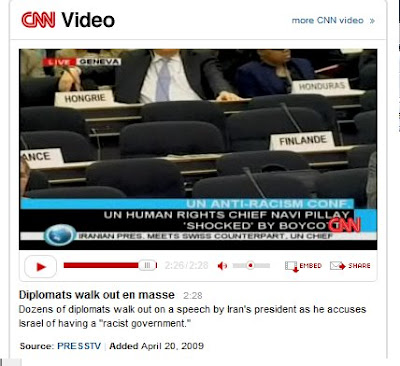 Over at UN Watch, they take note that Norway delivered a speech right after Ahmadinejad spoke: “The following speech by Norway vigorously challenged Ahmadinejad, calling him “the odd man out to hijack the conference.” But the conference was already hijacked before the ‘odd man’ walked in. KGS