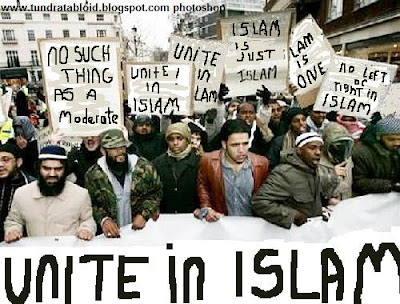 It’s a development of tremendous importance and you probably won’t be hearing about it from anywhere but here.

Mahdi Akef, supreme guide of the Egyptian Muslim Brotherhood, has defied his own country’s government to ally himself with Hizballah. What makes this such a remarkable and high-risk step?

–The Muslim Brotherhood is Sunni Muslim; the Lebanese Hizballah group is Shia. Brotherhood leaders do not view Shia Islamists as brothers and in the past have been alarmed at the rising power of Shia forces in Lebanon and Iraq.

–Hizballah is a client of Iran’s regime. As a Shia and non-Arab power, Iran is not on the Brotherhood’s Ramadan greeting card list.

–Egypt’s government has just announced a major Hizballah effort to destabilize the country by staging terrorist attacks there. Hizballah leader Hassan Nasrallah has openly called for the overthrow of Egypt’s regime. He has now acknowledged connections with the arrested terrorists, though he claims their mission was to help Hamas and attack Israel. The Egyptian government has rejected this justification. As a result, siding with Hizballah risks a government-sponsored wave of suppression against the Brotherhood.

–This step also makes the Brotherhood look unpatriotic in Arab and Sunni terms to millions of Egyptians by siding with Persian Iranians and Shia Muslims.

–Akef’s statement tears the chador off the pretension that the Brotherhood has become moderate. Of course, while not engaging in political violence within Egypt, it has long supported terrorism against Israel and the United States (in Iraq). Now, to this is added backing an Iran-Syria takeover of Lebanon and at least the image of accepting armed struggle against the Egyptian government by others.

–And most importantly of all, Akef has endorsed the strategic line of the Iran-Syria-Hizballah-Hamas axis in open defiance of not only Egypt’s government but of the country’s national interests as well.

What did Akef and his colleagues say that was so significant? The story is told in the London-based Arabic newspaper Al-Sharq al-Awsat, April 15. Put into a seemingly innocuous framework of supporting the Palestinians, the Brotherhood’s new line ends up in some shocking conclusions.

Akef said that Hamas should be supported, “By any means necessary.” The implication is, since the Brotherhood has always favored abrogation of the Egypt-Israel peace treaty that Egypt should go to war with Israel on behalf of the Palestinians. A Brotherhood government would probably do just that.

Hussein Ibrahim, deputy leader of the Brotherhood’s parliamentary bloc, which includes about 20 percent of the legislators, in calling for full Egyptian support of Hamas, stated, “Our enemy and Hizballah’s enemy are the same.” That enemy would seem to be Israel. But is Israel the only such enemy?

Akef took Hizballah’s side against Egypt’s rulers. Since Hizballah leader Nasrallah had denied he was doing anything against Egypt, everyone should take his word for it rather than that of Egyptian President Husni Mubarak.

In a statement to Al-Sharq Al-Awsat, Akef said there were two competing camps in the region, respectively waving the banners of “cooperative resistance” and of the “protection of the state’s sovereignty.” Countries like Egypt, Iraq, Jordan, and Saudi Arabia are rejecting Iranian influence and Islamist takeovers in the name of their own continued sovereignty.

Yet “resistance” is the basic slogan of the Iranian-led coalition. Akef insisted that he didn’t seek to compromise Egypt’s sovereignty. But asked how he could reconcile these two “axes” and why Egypt should help Hizballah he responded:

“There are two agendas [in the region]…an agenda working to protect and support the resistance against the Zionist enemy, and an agenda that only cares about satisfying the Americans and the Zionists.”

Any Arab listener must take this to mean that there are the properly struggling forces—Iran, Syria, Hamas, Hizballah—and the vile traitors—Egypt, Saudi Arabia, Jordan, and the Iraqi government.

Ibrahim made another telling statement in saying that the Muslim Brotherhood “do not see any contradiction in supporting the resistance and protecting the state’s sovereignty. We are in support of the resistance, in Gaza, and Palestine, and Lebanon….”

Why, however, did he include Lebanon? After all, the overwhelming majority of Lebanese Sunnis oppose Hizballah, viewing it as an arm of Syrian-Iranian power. The apparent answer is that Hizballah is fighting Israel and that the Palestinian issue overrides every other consideration.

Yet the Brotherhood is making choices. It certainly doesn’t support the Palestinian Authority, controlled by nationalist forces, but only the Islamist Hamas. And it opposes having an independent Palestinian state created through a peace process with Israel.

Moreover, so what if both Hizballah and the Brotherhood support Hamas? One would expect that the Brotherhood would feel itself engaged in a battle of influence with Hizballah as to who would be Hamas’s patron, and that of a supposed future Islamist Palestine. Could Brotherhood leaders not have noticed that in Lebanon there is no Hamas among Palestinians there because Iran and Hizballah seek to control them directly?

Under cover of supporting “the Palestinians,” then, the Brotherhood’s priority is on backing Islamist revolution in Iraq, Lebanon, among the Palestinians, Egypt, and elsewhere. The Brotherhood doesn’t engage in violence not out of principle but because the Egyptian government is too strong, the Brotherhood is too weak, and it hopes to make gains through elections aided by “useful idiots” in the West.

If it feels the power balance shift in the future, it would have no compunction about launching a revolution. And as it gains in power, the extremism of its program will be more openly exposed.

In this analysis, the conclusion is inevitable: who is fighting the hardest and being the most intransigent? The “resistance” led by Iran, which may have nuclear weapons in a year or so.

Source: http://aawsat.com/english/news.asp?section=1&id=16390
Barry Rubin is director of the Global Research in International Affairs (GLORIA) Center and editor of the Middle East Review of International Affairs (MERIA) Journal. His latest books are The Israel-Arab Reader (seventh edition), with Walter Laqueur (Viking-Penguin); the paperback edition of The Truth About Syria (Palgrave-Macmillan); A Chronological History of Terrorism, with Judy Colp Rubin, (Sharpe); and The Long War for Freedom: The Arab Struggle for Democracy in the Middle East (Wiley). To read and subscribe to MERIA, GLORIA articles, or to order books, go to http://www.gloria-center.org/