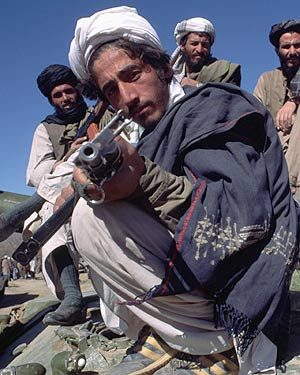 KABUL (al-AP) –Taliban gunmen used a firing squad to kill a young couple in southern Afghanistan for trying to elope, shooting them with rifles in front of a crowd in a lawless, militant-controlled region, officials said Tuesday. [TT: What a confused sentence. Obviously since the Taliban controls the area, sharia law is in force, wherever it can be implemented.]

The woman, 19, and the man, 21, were accused by the militants of immoral acts, and a council of conservative clerics decided that the two should be killed, said Ghulam Dastagir Azad, the governor of the southwestern province of Nimroz.[TT: Council of conservative clerics = Sharia court, and there is no such thing as conservatism in Islam, it’s just Islam, and this Sharia court decided that these two young people should die. Sharia in the raw.]

The two had fled their homes and hoped to travel to Iran, but their parents sent villagers to bring them home, said Sadiq Chakhansori, the chief of Nimroz’ provincial council. Once back home, the pair was either turned over to the Taliban by their parents or the militants came and took them by force, the officials said, providing slightly varying accounts.

Riflemen in the remote district of Khash Rod shot the man and woman with AK-47s Monday, said Chakhansori.

And the main Muslim organizations around the world are going to demonstrate, or offer statements of condemnation about the Afghan verdict and/or the use of sharia courts in general? Crickets chirping. All this comes on the heels of the Pakistani government’s decision to officially allow Sharia courts in Taliban controlled parts of northern Pakistan. 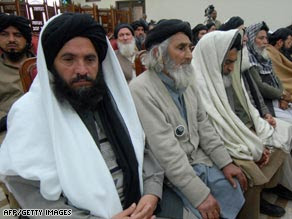 Pakistani government does deal with Taliban on sharia law

ISLAMABAD, Pakistan (CNN) — Pakistani government officials announced Monday an agreement with the Taliban to allow strict Islamic law, or sharia, to be implemented in parts of North West Frontier Province. It marks a major concession by the Pakistani government in its attempt to hold off Taliban militants who have terrorized the region with beheadings, kidnappings, and the destruction of girls’ schools.The government will recognize sharia for the entire Malakand Division, which includes the Swat district — a two-hour drive from Pakistan’s capital, Islamabad — the chief minister of North West Frontier Province Amir Haider Hoti announced Monday in a news conference. Islamic law is already being practiced in the area, where the Taliban have control.Hoti said the people of the region want sharia which will fill the “vacuum” left by a lack of access to Pakistan’s judicial system. He said he hoped it would bring peace to the region, where Pakistani forces have battled militants aligned with the Taliban.

Here’s a video posted at Gates of Vienna: “Vlad Tepes has combined two Sky News reports to make this fascinating video about current conditions in Pakistan’s Swat Valley under its new Taliban rulers”:

Reports of Pakistan being of in danger of collapsing increases the likelihood that Islamic fundamentalists will be insisting on greater swaths of Pakistan to succumb to sharia law, in order to avoid a civil war with the Taliban and its supporters. Just you wait, and remember that you heard it here first. KGS