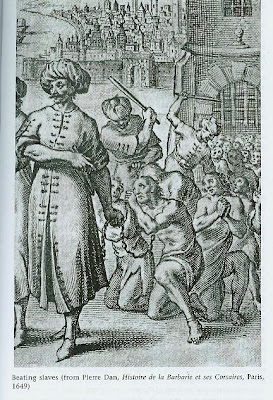 Ransom pays for Jihad
Bostom once again removes the fog that surrounds many of terms used in conjunction with the present day international jihad. The West is loathe to call things as they are, in hope that a “dumbed down” version of the truth will somehow help deter potential jihadis. Nonsense.The Tundra Tabloids greatly doubts its success. Only through properly assessing the ideology being used, and accurately describing the participants who adhere to it, can clear picture emerge. You have to know and understand what and who you are fighting, in order to achieve victory over it. Andy Bostom brings us that much closer to doing so. KGS
Jihad Piracy Redux—
The Somali Pirates Ain’t Captain Hook

Three years ago I published a review essay on jihad piracy [2] which focused on the then newly released, “Victory in Tripoli [3],” a masterful analysis of the Barbary jihadists, and the US experience of this scourge in the late 18th and early 19th centuries, by Joshua London. Timeless insights on the phenomenon of jihad piracy are reproduced here from that essay in light of Bob Spencer’s cogent analysis of the jihadism of the Somali pirates [4] wreaking similar havoc off the coast of East Africa—but as Bob might put it, we are of course to understand, “this has nothing to do with Islam.”

Alas, that is not the opinion of serious scholars of the phenomenon writing in an era before the present day, and the prevailing intellectual and moral idiocy of political correctness which a priori precludes (and vilifies) such important analyses. Hence Bob’s piece is as rare as it is invaluable.

Barbary jihad piracy was merely a 16th through 19th century [5] manifestation of the naval razzias characteristic of Islamic imperialism since its emergence (pp.41-43 [6]) in the 7th and 8th centuries. For example, although the Abbasid state (750-1250) “orientalized” the Caliphate, and lacked naval power of any importance, in the west, Muslim forces (i.e., decentralized, “organic formations”), continued the Islamic expansion by maritime warfare. Throughout the 9th and 10th centuries, Berbers and Arabs from Spain and North Africa launched raids along the coastal regions of France, Italy, Sicily, and in the Greek archipelago.

Francisco Gabrieli has described how these naval razzias were concordant with jihad, yet antithetical to the modern rule of law. He also emphasized their capacity for conquest, or, even when “disorganized”, triumphal rapine and destruction:

According to present-day concepts of international relations, such activities amounted to piracy, but they correspond perfectly to jihad, an Islamic religious duty. The conquest of Crete, in the east, and a good portion of the corsair warfare along the Provencal and Italian coasts, in the West, are among the most conspicuous instances of such “private initiative” which contributed to Arab domination in the Mediterranean.

…In the second half of the ninth century, a large number of Saracen (Muslim) raids occurred throughout Southern and Central Italy, but we do not get the impression of their ever having been part of a plan or organized conquest, as Musa’s, Tariq’s, and Asad’s campaigns had been in Spain and Sicily. Their only object seems to have been destruction and looting which was also the object of the armed groups faced by Charles on the Balat ash-Shuhada near Poitiers.

…The no less classical themes of Arabic war poetry, the hamasah sanctified by jihad, ring out in the recollections and boasts of Ibn Hamdis, the Sicilian Abu Firas, who exalts the military successes of Islam on Calabrian soil, the landing of Muslim troops at Reggio and their exploits against the patricians whom they cut to pieces or put to flight.

And here are additional timeless insights excerpts from Snouck Hurgronje’s The Achenese, circa 1906 (in English translation), followed by Bob Spencer’s important piece:

To these peoples in whom the savage is as a rule not yet extinct, nothing can more attractive than the idea that they as Mohammedans are the lords of the world and that all infidels stand far below them while the privilege or obligation of depriving certain of the latter of life or property merely gives a new turn to their favorite pursuits of fighting and pillage”

From Mohammedanism (which for centuries she [i.e., Aceh] is reputed to have accepted) she really only learnt a large number of dogmas relating to hatred of the infidel without any of their mitigating concomitants; so the Acehnese made a regular business of piracy and man-hunting at the expense of the neighboring non-Mohammedan countries and islands, and considered that they were justified in any act of treachery or violence to European (and latterly to American) traders who came in search of pepper, the staple product of the country. Complaints of robbery and murder on board ships trading in Acehnese parts thus grew to be chronic.“

The Somali Pirates Are Jihadists [4]

Not only are the Somali pirates Islamic jihadists, but their religious identity is much more important to them than being considered the sons and heirs of Blackbeard and Captain Kidd. On Sunday, Reuters quoted one of the pirates saying, “We never kill people. We are Muslims. We are marines, coastguards — not pirates.”