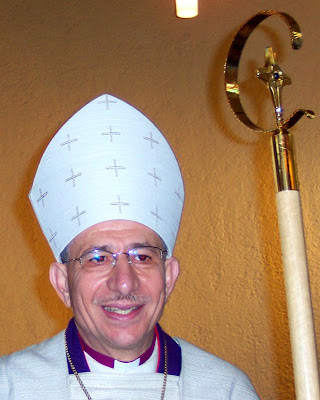 Lutheran Bishop Munib Younan:
I was once blind but now I don’t see!

The Tundra Tabloids has stated time and again, that the words of religious leaders living within a tyranny or in a harsh authoritarian regime, must be judged very carefully. Religious leaders within state sanctioned churches in the former Soviet Union, or within Communist China, were/are either true cogs in the party machine, mouthing the official line for Western consumption, or they are just trying to limit the suffering to their flock, from those who can do them most harm, the state and those who support it.

It’s really something to see, over and over again, buffoonish religious leaders traveling to these areas to view the horse and pony shows the locals parade before them, and then swallowing it whole. Willful dupes or just plain simple minded dupes, take a pick.

Here’s another choice example of the tomfoolery that parades itself as justified concerns, but on the contrary, being nothing more than a great distortion of reality. The TT takes a special look at the Lutheran Bishop, Munib Younan, who is the chief disseminator of this Palestinian false propaganda, being very much responsible for distorting the truth to the Finnish public on a regular basis.

One would be hard pressed to rationalize why Christian Arabs are leaving in droves from the West Bank and Gaza, though the population of the Palestinians are increasing year to year. They make it all a fault of the “continued occupation” by Israel. If so, why then are Christian Arabs not Muslims, the only ones emmigrating due to untold suffering? The latter however, seem very intent on increasing their numbers, occupation or not.

That’s a conondrum the dear Bishop and his fellow religionists dare not attempt to crack, because it would lead to a conclusion that would put them and their flock in disfavor with the Muslim majority.

You see something missing people? No mention of the rise of Islamic fundamentalism in the disputed territories, not one mention at all, it’s supposedly the only place in the Middle East in which a Christian minority is not experiencing trouble from a resurgent Islam. That’s what Munib Younan would have you to believe, the rise of supposed “ultra-orthodox” Jews in the government are to blame for the lack of interest in peace, not genocidal Muslim Arabs who murder Jews for the sake of murdering Jews.

For Munib Younan, everything happens within a bubble. Israel’s protective barrier is not a response to something, like terrorism, it’s just there because Israel has nothing better to do than to waste money and make the Arabs’ lives miserable. The Bishop would have you to believe that the Gaza war is just another example Israeli aggression, not an effort to halt the daily bombarment of rockets upon the citizens of Israel.

It’s so bone-headed obvious what the man of the soiled cloth is trying to do, that one not even try hard to counter his nonsense. Yet, the Finnish Lutheran (liberal) church leaders eat up his message from beginning to end, because deep down, they have no desire to hear the truth, they are brain dead to it. KGS