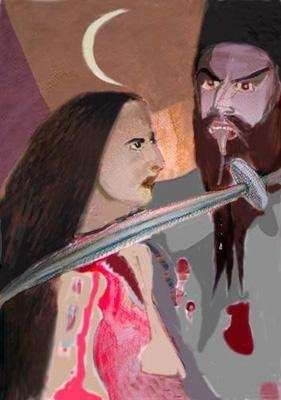 In Pakistan, Russia or Jordan,
a Muslim girl can lose her life for just trying to live itThanks to Atlas for the string of articles, Pamela is at the forefront of highlighting honour dishonour related murders. Islamic women the world over should be greatful for Atlas’ efforts at bringing this heinous problem to light. KGS

Girl assaulted by cousin over rejecting marriage proposal A young man along with his three accomplices tried to chop off the hands of his parental cousin after she resisted the sexual assault. The girl was shifted to the Meo Hospital with wounds where doctors had to cut her left leg to save her life. Punjab Chief Minister Mian Shabaz Sharif took notice of the incident and ordered the police to submit an immediate report in this connection. Fauzia, 20, told that she was alone at home when her cousin Nadeem Abbas and his three friends broke into the house, and tried to assault her. “They attempted to cut my hands, legs and shoulders with sharp axe on showing resistance,” she said….
Muslim father orders daughter killed over short skirt A Muslim resident of Russia’s St. Petersburg has hired killers to rid him of a daughter who disrespected Islamic laws by wearing short skirts. The police detained Gafar Kerimov, 46, after he reported that his daughter went missing, but blurted out that the girl was dead already, Komsomolskaya Pravda newspaper reported Monday. The family, ethnic Azerbaijanis, used to have frequent arguments about how the daughter should dress and behave. Rashida Kirimova, 21, studied medicine at a St. Petersburg school and waved away her father’s criticism when he said her clothes weren’t modest enough and were unfit for a Muslim girl.During winter, Rashida wore high-necked sweaters and long trousers, causing no problems in the neighborhood, but when spring came, she put on a skirt that left her knees exposed. The father’s Muslim friends again started reproaching him for being negligent and allowing his daughter to walk around dressed like a fallen woman. They said the insult could only be washed away by blood, and introduced Gafar to a killer, who agreed to help him for around $3000.The killer, Kadyr Suleymanov, seized the girl on April 8th as she was hurrying to classes. He and two accomplices drove her out of the city to a suburban dump, shot her dead and covered her body with garbage. The body was found by the police after the father confessed he had ordered the killing. Two of three criminals have been detained.Jordanian man accused of stabbing pregnant sister in a so-called honor killing.Authorities in Jordan are accusing a man of stabbing his pregnant sister to death in a so-called honor killing. A Prosecutor says the attacker repeatedly stabbed the 28-year-old woman in the face, abdomen and back and mutilated her body with a meat cleaver. An autopsy showed the married woman was five months pregnant.From the Jordan Times:The team, which included Rami Shawareb and Hassan Hawari, also detected marks of struggle and bruises on the victim’s body, which indicated that she was “most probably tortured before she was murdered“, the source noted. “The pathologists found traces of rope on her hands and feet and reported seeing bruises caused by a blunt object on different parts of her body,” the source added.The suspect was ordered detained for 14 days at a correctional facility pending further investigation into the case. The victim became the ninth person reportedly murdered for reasons of honour in Jordan this year and the second this month. On April 6, a teenager stabbed his sister to death because she would often leave her family’s house and go to unknown destinations.

Where’s the media? No Jews involved. Nothing to see here, keep moving (over the dead bodies of women the world over).
Gaza woman dead in fourth so-called ‘honor killing’ in last week Ma’an News Agency

Bethlehem – Ma’an – A woman was killed on Monday morning in the Gaza Strip in the fourth killing related to so-called “family” honor in the last week.

According to information collected by the Palestinian Center for Human Rights (PCHR), 28-year-old Rihab Al-Hazin, from An-Nusseirat Refugee Camp was killed by her 21-year-old brother, who told police he killed his sister to ‘maintain family honor.’
[…]

Last Thursday, three members of the Olaiwa family were killed in Gaza City. Police found three bodies belonging to Sufian Arafat Olaiwa, 45, his wife, Miriam Al-Majdoub Olaiwa, 30, and their son, Jawhar Sufian Olaiwa, 5, in their houses in the Ash-Shuja’iyya neighborhood in the east of Gaza City. Each had been shot several times. Later, police arrested three members of the same family.

Yousef Abdul Wahab, Chief of the Police Criminal Investigation Bureau in Gaza, told PCHR that the crimes were related to so-called ‘family honor’.

These killings, PCHR said, are a sign of a resurgence in so-called honor killings. The Center called for these killings to be prosecuted as murders, and for the Palestinian judicial system not to hand out reduced sentences to perpetrators who claim reasons of “family honor.”