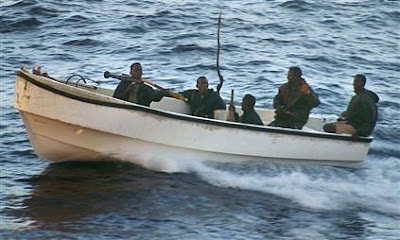 What in the world for? 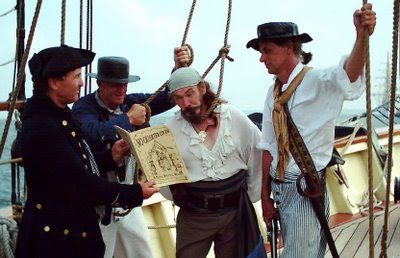 Pure madness when the sane countries of the world are as, or even more concerned with the “human rights” of thugs and predators, than with safe passage of its citizens. The West is wimping out and it has not gone unnoticed. Here’s a few salient points from Mark Steyn on the subject. KGSCivilization walking the plank

[…] Once upon a time we killed and captured pirates. Today, it’s all more complicated. Attorney General Eric Holder has declined to say whether the kidnappers of the American captain will be “brought to justice” by the U.S. “I’m not sure exactly what would happen next,” declares the chief law-enforcement official of the world’s superpower. But some things we can say for certain. Obviously, if the United States Navy hanged some eye-patched, peg-legged blackguard from the yardarm or made him walk the plank, pious senators would rise to denounce an America that no longer lived up to its highest ideals, and the network talking-heads would argue that Plankgate was recruiting more and more young men to the pirates’ cause, and judges would rule that pirates were entitled to the protections of the U.S. Constitution and that their peg legs had to be replaced by high-tech prosthetic limbs at taxpayer expense.

Meanwhile, the Royal Navy, which over the centuries did more than anyone to rid the civilized world of the menace of piracy, now declines even to risk capturing their Somali successors, having been advised by Her Majesty’s Government that, under the European Human Rights Act, any pirate taken into custody would be entitled to claim refugee status in the United Kingdom and live on welfare for the rest of his life. I doubt “Pirates of the Caribbean” would have cleaned up at the box office if the big finale had shown Geoffrey Rush and his crew of scurvy sea dogs settling down in council flats in Manchester and going down to the pub for a couple of jiggers of rum washed down to cries of “Aaaaargh, shiver me benefits check, lad.” From “Avast, me hearties!” to a vast welfare scam is not progress.

In a world of legalisms, resistance is futile. The Royal Navy sailors kidnapped by Iran two years ago and humiliated by the mullahs on TV were operating under rules of engagement that call for “de-escalation” in the event of a confrontation. Which is to say their rules of engagement are rules of nonengagement. Likewise, merchant vessels equipped with cannon in the 18th century now sail unarmed.They contract with expensive private security firms, but those security teams do not carry guns: When the MV Biscaglia was seized by pirates in the Gulf of Aden last year, the Indian and Bangladeshi crew were taken hostage but the three unarmed guards from “Anti-Piracy Maritime Security Solutions” in London “escaped by jumping into the water.” Some solution. When you make a lucrative activity low-risk, you get more of it.

As my colleague Andrew McCarthy wrote, “Civilization is not an evolution of mankind but the imposition of human good on human evil. It is not a historical inevitability. It is a battle that has to be fought every day, because evil doesn’t recede willingly before the wheels of progress.” Very true. Somalia, Iran and North Korea are all less “civilized” than they were a couple of generations ago. And yet in one sense they have made undeniable progress: They have globalized their pathologies. Somali pirates seize vessels the size of aircraft carriers flying the ensigns of the great powers. Iranian proxies run Gaza and much of Lebanon. North Korea’s impoverished prison state provides nuclear technology to Damascus and Tehran. Unlovely as it is, Pyongyang nevertheless has friends on the Security Council. Powerful states protect one-man psycho states. One-man psycho states provide delivery systems to apocalyptic ideological states. Apocalyptic ideological states fund nonstate actors around the world. And in Somalia and elsewhere nonstate actors are constrained only by their ever increasing capabilities.