Could have been UK’s worst Islamic terrorist attack 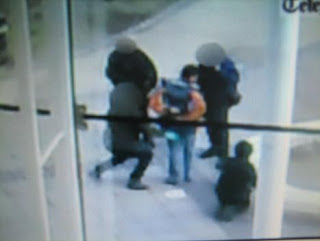 According to the video clip included in the article, the police were forced move quickly to arrest 10 Pakistanis on student visas, “and two others”, in broad daylight, rather than under the cover of darkness due to the heightened level of the emergency, the threat of an attack was that close to coming off. Please take notice on how the Telegraph strictly adheres to what is permissible to report about these men, Islam and Muslim are nowhere to be seen. KGSAl-Qaeda terror plot to bomb Easter shoppers

Sources told The Daily Telegraph that the arrests of 12 men in the north west of England on Wednesday were linked to a suspected plan to launch a devastating attack this weekend.

Some of the suspects were watched by MI5 agents as they filmed themselves outside the Trafford Centre on the edge of Manchester, the Arndale Centre in the city centre, and the nearby St Ann’s Square.

Police were forced to round up the alleged plotters after they were overheard discussing dates, understood to include the Easter bank holiday, one of the busiest shopping weekends of the year.

“It could have been the next few days and they were talking about 10 days at the outside,” one source said. “We had to act.” Police are now engaged in a search for an alleged bomb factory, where explosives might have been assembled.

If such a plot was carried out, it would almost certainly have been Britain’s worst terrorist attack, with the potential to cause more deaths than the suicide attacks of July 7, 2005, when 52 people were murdered. More here.