Skip to content
Home
/
2009
/
March
/
30
/
Uncategorized
/
Norway: Local Jews Anxious Over Rise in Anti-Semitism…….
Facebook
Twitter
Google+
LinkedIn
Pinterest
Dr.Manfred Gerstenfeld chairman of the Steering Committee of the Jerusalem Center for Publaic Affairs, alerts the Tundra Tabloids of the following article in today’s J’Lem Post, concerning the increase of anti-Semitism in Norway. It’s a willful blindness, and Norwegian society must be forced to confront their racism towards Jews which is masked under the guise of criticism towards Israeli policies, as well as their humanitarian racism towards the people they supposedly are defending, the Palestinians. 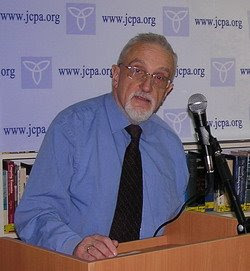 Mar. 30, 2009 MAYA SPITZER , THE JERUSALEM POST Anti-Israel and anti-Semitic sentiment has exploded in Norway – driven by the Norwegian media and intellectual elite – due to Operation Cast Lead, according to Norwegian Jewish leaders. During the war, Olso was fraught with violent anti-Israel demonstrations. Numerous government officials decried Israel’s actions in Gaza – including Minister of Finance Kristin Halvorsen, who led a march shouting, “Death to the Jews!” Norwegian doctor Mads Gilbert, who worked in Gaza and disseminated stories about Israel’s brutality, became a national hero in the Norwegian media. Even before the war began, local Jews were tense because of anti-Semitic cartoons, recent boycotts of Israeli merchandise, and the highly publicized affair of Norwegian comic Otto Jespersen, who made anti-Semitic remarks on national television.This wave continued with renowned Norwegian painter Håkon Gullvåg’s opening a new exhibition entitled “Requiem for the Children of Gaza” in Trondheim over the weekend. The city’s mayor, Rita Ottervik, applauded Gullvåg for accurately depicting the Gaza conflict. Norwegian Prime Minister Jens Stoltenberg also commended Gullvåg for “painting pictures that place this [the plight of the Palestinians] on the agenda.”Kygell Nyhuus, secretary of the Norwegian Press Professional Association, told The Jerusalem Post recently that the Jespersen incident – in which the comedian’s anti-Semitic remarks on the TV2 network were deemed “in bad conduct” earlier this year, and the network forced to publish an adjudication – was the first time satire had ever been censored in Norway.”I don’t see lots of anti-Semitism in Norway, though,” Nyhuus said. “This is not at all indicative of anti-Semitism in Norway, and the decision itself had nothing to do with the anti-Semitic content of his comments – only the degree of their vulgarity.”
However, according to Manfred Gerstenfeld, chairman of the Jerusalem Center of Public Affairs, “the elite, the academics, politicians and media consider themselves to be great moralists, with very little self-introspection. Their self-righteousness, arrogance, and inherited Lutheran prejudices against Jews has led to a huge amount of anti-Israel sentiment. Gaza caused these latent feelings in society to come to the fore.”Rabbi Yoav Melchior, considered the leading rabbi of Norway, said he had been “very scared during the war.””Hatred spread in a fast, dangerous way. This was blind emotionalism against Israel and against Jews. It gets deep at the heart of Norway’s emotional anti-Semitism. The current wave of anti-Semitism shows what people have been holding inside them,” he said.Gerstenfeld, who authored and recently published Behind the Humanitarian Mask: The Nordic Countries, Israel, and the Jews, noted that “considering that there are only 700 Jews in a population of 4.6 million, there is a lot of hatred against Israel and the Jews.”Norway’s government has been vocal in its criticism of Israel in recent months. At the outbreak of the Gaza hostilities, Foreign Minister Jonas Gahr Støre declared that “Norway strongly condemns any form of warfare that causes severe civilian suffering, and calls on Israel to withdraw its forces immediately.”In addition, “the Norwegians are pioneers in boycotting Israel,” Gerstenfeld said, citing many Norwegian trade unions’ affinity for supporting Palestinian interests at Israel’s expense.In an NGO Monitor report released March 12, Norway was found to have supported Palestinian humanitarian aid organizations for the past decade, including many that have pursued radical anti-Israel agendas. The report called this support for “boycotts and apartheid rhetoric instead of peace and coexistence.”According to Gerstenfeld, “because Norway is a very tiny country with a language most don’t understand, nobody gives them much attention. Their anti-Semitism flew completely under the radar for a long time.”Now that the world is becoming aware of the situation in Norway, “the Norwegian elite won’t get away with this incredible arrogance any longer,” he asserted.