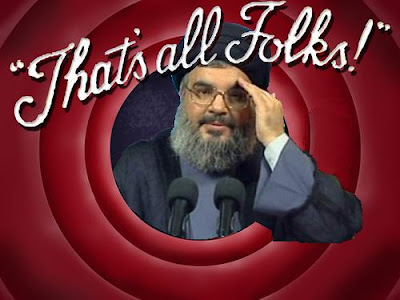 Nasrallah: Our way or the highway!
Hezbollah Spends Millions to Rebuild Stronghold

BEIRUT (AFP) – Salam Hassoun is thrilled by the new flat Hezbollah has built for her to replace the one Israeli bombs destroyed during the 2006 summer war on the Lebanese Shiite movement. The war ravaged Beirut’s southern suburbs, a Hezbollah stronghold that includes the teeming neighbourhood of Haret Hreik, where a mammoth Hezbollah-orchestrated reconstruction drive is underway.

The deafening explosions of Israeli bombs have been replaced by the grinding cacophony of earth-movers and cement mixers contracted to rebuild 241 of the 282 buildings destroyed in the bombing. The project, dubbed Waad (pledge in Arabic), has won the heart of Hassoun but has also raised a storm of political dust between Hezbollah and the government, whose authority in the southern suburbs has lagged for decades.

“I used to dream of an apartment where the living room was separated from the dining area and where the kitchen would be much bigger, and Waad gave me that,” Hassoun told AFP during a Hezbollah-organised tour of Haret Hreik. “May God protect (Hezbollah chief Hassan) Nasrallah. He has kept his promise,” she said from her ninth-storey flat in one of several spanking new towers.

Project director Hassan Jechi told AFP 400 million dollars have been allocated to transform the southern suburbs into a modern, residential area. In Haret Hreik’s so-called “security area”, where Nasrallah once lived and Hezbollah had its headquarters and which became “ground zero” in Israel’s onslaught, reconstruction is now at its zenith.

Jechi said Hezbollah institutions will move out of the area, where developers “will only put residential buildings and a public park to give residents a breathing space.”

So Hezbollah now wants to give its people a breathing space after cramming their area with the Hezbollah’s political and military infrastructure, I wonder if the people were totally pissed off being used as human shields by their leaders during the last war? KGS