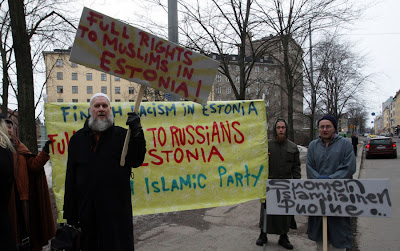 The FIP has a new press release at its website, which bemoans the supposed sad state of affairs for Estonia’s downtrodden minorities. It appears that the FIP sees nothing good in Estonian society, where could the FIP’s chairman, Abdullah Tammi, have gotten such an idea from?FIP:

The Finnish Islamic Party wishes to express its concern over the Republic of Estonia administration’s fascism and racism, that’s in favor of violating human rights and apartheid politics. We note Estonia’s continual violating of human rights of its minorities by depriving them of their civil rights. TT: An Islamic political party that seeks guidance from an apartheid Islamic regime, Saudi Arabia, is labeling the liberal democracy of Estonia as racist and apartheid state,…….is joke. Saudi women are sequestered in their homes, made to wear tents and are unable to even drive a car or earn a living outside the house. Abdullah should start his campaign for equality in the Kingdom Saud.

For example, Russian’s born in Estonia are not given citizenship. The education system discriminates against Russian speakers. This hinders their integration in society. The absence of citizenship, makes travel and work more difficult. TT: Russians born in Estonia before 1940 have automatic citizenship, those coming after must be naturalized, with 27% retaining their Russian citizenship, 35% becoming Estonians, and for whatever reason, 35% refrain from either.Estonia discriminates against the Muslim population. Making it difficult for them to practice Islam, by preventing the construction of mosques. This is against all international conventions. All the above-described, affects all minority groups of the Estonian Republic, upon which the Estonian administration has focused its fascist and racist discrimination. TT: If Islam were just a religion, a building of a mosque would not be a significant event, but as Turkey’s PM stated: “Mosques are our barracks, minarets our bayonets, domes our helmets, the believers our soldiers.” That’s enough to sideline mosque building for some time to come.

The Finnish Islamic Party condemns Estonian’s falsification of history during the Soviet era. We believe that Estonia should recognize its crimes against humanity, which it committed during the Second World War as Nazi Germany’s partner. During the Second World War period in Estonia, Estonian legion belonged to the German Waffen SS that committed crimes against humanity.
TT: All people who committed crimes in the Jewish Holocaust -something of which Tammi couldn’t mouth by name- should be brought to justice, but Tammi’s signling out Estonia is akin to the pot calling the kettle black. More to the point, the FIP most likely could care less about the Holocaust or the Jews murdered. More here.The Finnish Islamic Party expresses to the Finnish Government that it should use all political and diplomatic means to address the Estonian Human Rights situation. We believe that the current Estonian fascist government that’s in favor of an apartheid policy should resign. Estonia should examine Soviet history objectively.

The Tundra Tabloids expresses its wishes for the Finnish Islamic Party to renounce their Finnish citizenship, hop on a next flight to Riyadh, and enjoy their true fascist ideology in the apartheid kingdom of Saudi Arabia. And may we never see hide nor hair of them again. Jyväskylä, 24.3.2009
Tundra Tabloids
KGS
Editor