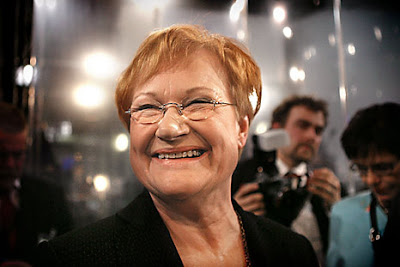 Tarj Halonen: You don’t even have to be looking for work!

According to the current president of Finland, Tarja Halonen, the Finnish state should have ‘open migration’, and most importantly, showing her true socialist pedigree, she states that: ‘people do not live on work alone‘. Well of course they don’t, especially in the socialist state playpen where euphemisms such as cradle to the grave are actually put into practice.

Ok, so I’m exaggerating a bit. Finland has in fact been slowly weening itself from the old socialist model of the welfare state, but not completely. For a foreigner not having the proper works skills to enter the Finnish job market -especially when they hail from states that Finland is actively courting for future potential workers- living off a meager welfare check with a subsidized apt. in Helsinki (rent in Helsinki isn’t cheap), is a major leap forward in their quality of life, but an extra unneeded burden for the Finnish tax payer.

So it shouldn’t come as a surprise that immigrants figure highly in the ranks of the unemployed, proving that Finland’s current immigration policies are clearly not a success story. But that won’t stop the politicians, no matter if they hail from the Left, Center or Right. The current Finnish Prime Minister, Matti Vanhanen (Center Party) states the following incoherent sentence in the Helsingin Sanomat, concerning Finland’s need for immigrant workers to fill the job market in the next two decades:

Vanhanen: ‘Immigrants will be needed in all kinds of professions, from the highest researchers and doctors on down. It needs to be based on the real needs of the labour market. At present, as people are being laid off; we are not getting work-based immigration, because work is not available”.

But Finland is getting anywhere between 5000-7000 immigrants per year, regardless of the economic situation, which means that whether in time of good economic hustle and bustle or recession, the doors to Finland are wide open. Shocking statement:

Helsingin Sanomat: “In her speech Halonen warned against treating immigrants as mere available labour. She said that while she is in favour of free migration, she is opposed to the idea of “importing labour”. “People must not be handled as mere labour. Work is important, but people do not live on work alone. We need to take care of immigrants also when they get old.”

But not all politicians in Finland are of the same opinion, former president Martti Ahtisaari has taken a public stand against the current doughy headed policies of the current president, in a joint press conference, stating clearly that:

Former President Martti Ahtisaari noted that his views diverge somewhat from those of President Halonen. In his view, there is nothing wrong with trying to encourage people with the kinds of skills that the country needs to immigrate to Finland. However, he emphasised the need to focus on refugee policy as well. He pointed out that Finland is not an easy country for immigrants to come to. “We have a foreign culture, a unique language, and a rough climate.”

He also noted that he had heard an estimate in the late 1990s that getting 20,000 immigrants a year might not necessarily be enough, and that about 40,000 newcomers would be needed each year. Ahtisaari recalled that in the mid-70s, former Prime Minister and Social Democratic Party leader Kalevi Sorsa said in an interview that Finland would need to take in 15,000 immigrants a year in the future. “It brought on a fierce reaction, and some people resigned from the [Social Democratic] Party.”

The SDP has indeed changed its tune, it now spearheads the same multi-cultural dash that would have brought the party to its knees only 30 years ago. It may very well be, that Finland needs immigration to help in the job market, but the Finns need to be very careful in selecting from what region of the world they draw those future workers. Actively pursuing immigrants from the Islamic Middle East is pure foolishness, especially when reviewing the situation in the neighboring Scandinavian countries. Stating that these workers needn’t be pursuing work when contemplating a move to Finland, is outrageuously stupid. KGS