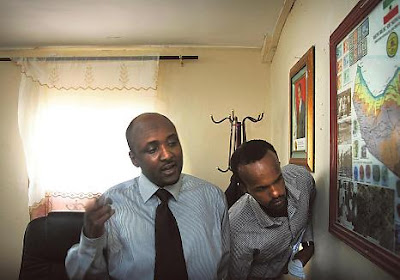 Minister Mohamed Osman: How dare Finland deport Somali criminals
back to Somalia, and then not even return our calls!
H/T: Kumitonttu
Finland stands out from most Scandinavians countries, not only because of the differences in language, but for its penchant in bucking the trend where immigration and refugee policies are concerned. While the rest of Scandinavia has widely opened its gates to both refugees and immigrants from all over the Middle East, Finland still plods along maintaining its own course, being very careful and watchful of what is happening around it.
Yes, there is room for concern for what some politicians here would like to implement, proving that not all Finnish politicians “get it”, but for the most part, carefullness and a watchfull eye is the hallmark of Finnish political attitudes towards this issues like these. So it doesn’t come as too great of a surprise that Finland deported a Somali criminal back to his homeland, and that they are not receiving any of the Somali minister’s phone calls. KGS
Somaliland wants to send deportee back to Finland

Somaliland, a state set up in the north of war-torn Somalia, has sharply condemned Finland for deporting a Somali-born man convicted of numerous crimes in Finland to Somaliland early last month. “Somaliland is no camping area”, said Mohamed Osman, Somaliland’s Minister of Return Migration and Reconstruction to Helsingin Sanomat on Tuesday.
“Finland should apologise to us and take the man back.” Finnish police escorted the man to Dubai, where they placed him on a plane to Hargeisa, the capital of Somaliland, on February 9th, along with a temporary alien’s passport. The ministry in Hargeisa learned about this action, and other deportation decisions made by Finland by reading the International Edition of Helsingin Sanomat on the Internet. Osman said that Finnish officials had not been in contact with Somaliland over the issue. “In our view, the man has been smuggled into Somaliland. We cannot accept this.” […]
Osman says that Finland has not reacted to his government’s attempts at contact. “Finnish officials have not responded to us in any way. We interpret this as hostility toward us, and are very disappointed.”