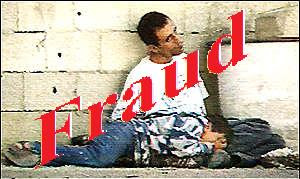 We all knew this years ago, but it’s great that an independent source has finally come to the same conclusion. Kudos to Phillippe Karsenty, who dared to proceed with the case when everyone was telling him that it was a lost cause. KGS.
Al Dura story: new strong allies and next actions scheduled
Dear friends,

I’m writing to inform you of a new documentary by the German public TV station ARD as well as unprecedented support from the Israeli minister of Foreign Affairs. The German public TV, ARD, broadcast, on March 4, 2009, a documentary which confirms that the news report, narrated by Charles Enderlin and broadcast by France 2 on September 30, 2000, is a fraud. Here is the evidence revealed, and confirmed, by this documentary:

Thanks to a biometric analysis of the faces, it has been proven that the boy who was filmed by France 2 is not the boy presented at the Gaza morgue and buried later. The eyebrows and the lips are very different.

On the Israeli side, things are heading in the right direction. During my recent speaking tour in Israel, I met many Israeli officials, as well as many members of the coming Netanyahu administration. Their reaction was very positive: “The al Dura story has to be solved once and for all and pretty soon”.