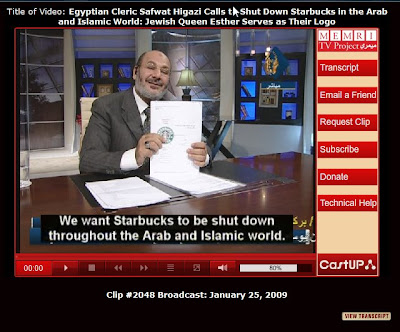 two tailed mermaid, or siren, which is part of the Starbucks logo, being mistaken for being the picture of the Jewish Queen, Esther. But most importantly, it’s what the Islamic cleric himself thinks that matters most.
It would be incredibly hilarious if it weren’t so incredibly vile and racist. What’s in question is the ancient symbol of a
Not only does the cleric get it wrong about the picture, he compounds his buffoonish thinking with his deep seated anti-Semitism, that is all too prevalent in the Islamic world, thanks to the Koran and other Islamic texts. At the same time when the OIC is demanding respect for Islam by the non-Muslim world, the Islamic world shows its open disdain for Jews and all other non-Muslims. KGS

From the MEMRI org:

Following are excerpts from an address by Egyptian cleric Safwat Higazi, which aired on Al-Nas TV on January 25, 2009.

Has any of you ever wondered who this woman with a crown on her head is? Why do we boycott Starbucks? I will tell you, so you will know why you should boycott this company, and what this logo stands for. As I’ve already said, it is not enough to avoid entering this coffee shop. It is not enough to you to refrain from drinking this coffee. You must urge people never to go there, but none of you should even consider throwing a stone, breaking anything, or burning [the place] down.

King [Xerxes] gave an order that the seven most beautiful girls in the kingdom be brought to him. So they held contests and auditions, and selected the seven most beautiful virgins, one of whom was the Jewish Esther, whose uncle, Mordechai – or actually, it was her cousin’s brother – was a villain. It was Mordechai who hatched this plot. Esther was one of the seven girls brought before King Xerxes in the palace. When Esther, who was very beautiful, was shown to King Xerxes, she captured his heart, and he chose her to be his queen. He placed a crown on her head, and the crown you see here [Higazi indicates the Starbucks logo] is the crown of the kingdom of Xerxes, and this is Esther, who became Queen of Persia, instead of Queen Vashti.

Can you believe that in Mecca, Al-Madina, Cairo, Damascus, Kuwait, and all over the Islamic world, hangs the picture of beautiful Queen Esther, with a crown on her head, and we buy her products.

We want Starbucks to be shut down throughout the Arab and Islamic world. We want it to be shut down in Mecca and in Al-Madina. I implore King Abdallah bin Abd Al-‘Aziz, the Custodian of the Two Holy Mosques: It is inconceivable that in Mecca and Al-Madina, there will be a picture of Queen Esther, the queen of the Jews.

Cleric Safwat Higazi: Islam is threatened by this Jewish mermaid!