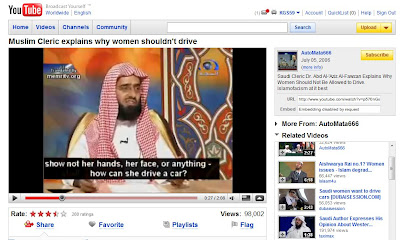 The Tundra Tabloids ran a recent post about the Saudis arresting a woman for the crime of driving a car. Included in the post was a link to a You Tube video of a MEMRI film clip of a Saudi Sheik listing the reasons why the West is so decedent, and the Saudis so moral. Commenter johnrj08, does such a wonderful job of debunking the Saudi Cleric, Dr. Abd Al-‘Aziz Al-Fawzan, that I just had to post it on the front page of this blog, it was just to good of response to lay hidden in the comment section. Well done Johnrj08, well done. KGS

Man being whipped according to sharia law
This Saudi cleric condemns his whole society with his flawed logic.

Johnjr08: This Saudi cleric condemns his whole society with his flawed logic. He presumes that, without strict enforcement of moral laws, Saudi society would corrupt and women would become harlots, as if none of the morals or behaviors taught to Saudi children by their parents would have any influence on them. Islamic law takes away any responsibility from the individual for moderating their behavior by imposing rigidly enforced codes and draconian punishments. To me, that is the definition of a corrupt society. When people are so easily enticed by temptations that they cannot be exposed to them without severe punishment, then they have no moral fiber of their own. “Collective righteousness” is meaningless, because it is nothing more than a reflection of the state’s strict control. George Orwell investigated this in his book “1984”. The Saudis and other Mideast countries who oppress women are weak, corrupt societies that have to use fear to elicit “moral” behavior from their population. So, when I listened to this bearded cleric talk about how pure and blessed the Kingdom is because women aren’t allowed to show their hands or their faces in public, I just had to laugh. Not because it was funny, but because it was so outrageous. A person who lives in a free society and chooses to live a righteous life, despite being exposed to temptation on a daily basis, is far stronger and purer that the person who only does the right thing because she’s afraid she’ll get caught and punished. A person who has never been confronted by temptation and overcome it, can make no claim to high morality. This so-called religious leader hasn’t figured out that fundamental concept. Either that, or he just hates women and has developed a rationale for preserving their oppression.