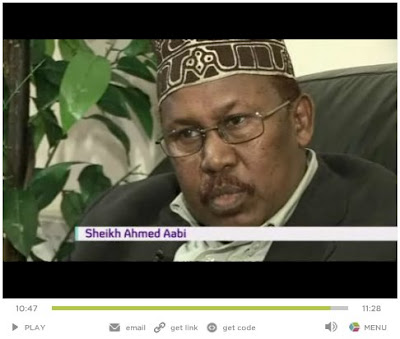 Local UK Somalia leader, Sheikh Ahmed Aabi, who want’s to stop Jihadists from requiting within the UK: “They wanted to capture the country, if they captured the country for example, Somalia, then Kenya, then Ethiopia, then the UK, then America. That’s the way they think, not only Somalia, all over the world, they say all the people of the world must be Muslim, they must follow the sharia law.”

This UK Channel 4 report aired about 2 1/2 weeks ago, I just now happened to come across it at the Islam in Europe blog. It’s an investigative report on how Somalis in the UK are finding their way back to Somalia to join the jihad. The TT reported two years ago on the same phenomenon taking place here in Finland, in which Somali refugee, Idris Hassan Farah, -whom the Finnish state police had hoped would be their “eyes and ears” inside the community- spills the beans in TV interview about Somalis in Finland heading back to Somalia to join the jihad.

One interesting spot in the documentary, is the portion that pays homage to the notion that moderate Muslims are in fact teaching their communities how wrong violent jihad is. Of course any Muslim leader that does so should be commended, but what gives pause for concern, is the part in which the journalist states:

At this mosque in Laten in East London, Somali leaders admit, they too are worried. Most Somalis, including this group follow a moderate version of Islam. This is a special meeting to discuss on how to stop radicals from stigmatizing their entire community. The congregation is shown a medley of suicide bomber videos, even the beheading of the prisoner, and warned that such behaviour is not sanctioned by the Koran.

But as anyone knows who has read the Koran, Mohamed’s opened ended call to wage war upon the unbeliever until the world is subdued to Islam, is considered a valid teaching in a schools of Islamic orthodoxy, regardless of whether or not this particular local imam is followng the strict letter of the law.Those of us who point that out, are then accused of having accepted and then disseminating the “Jihadists’version” of Islam, when in fact, it’s just Islam. No Imam, or Islamic cleric or scholar, at least none that I have heard of, have openly condemned the seats of Islamic orthodoxy that exist throughout the world, of promoting false teachings. Yet, we are led to believe that what the jihadis are doing are not in accordance with the Koran, though not one fatwa has ever been issued against Osama bin-Laden and jihadists from any of the houses of Islamic orthodoxy.

Those of us who warn about the Koran’s (and Hadiths) inherent violent, racist texts, and the belief that Mohamed is to be explemplified in every way, can not be deemed as helping the jihadists by exposing Islam for what it is. How in the world will the Islamic community ever tackle the violent Jihad ideology and the subjugation of the non-muslim in a serious way, when they themselves lie about their own holy texts say? KGS