Skip to content
Home
/
2009
/
March
/
4
/
Uncategorized
/
More on the Finnish State’s Prosecution of Councilman Olavi Mäenpää for Incitement Against a Racial Group…….
Facebook
Twitter
Google+
LinkedIn
Pinterest
It all took place in a televised debate in the 2007 elections campaign, in which SKS representative, Olavi Mäenpää supposedly incites hatred and violence against an ethnic group. It has now lead, somewhat belatedly, being almost two years after the fact, to the Finnish state prosecuter’s office bringing up charges against the city councilman from Turku Finland.
Here is a Turun Sanomat article in today’s edition of the paper, that sheds more light on what is at issue here. The TT has added English subtitles to an existing You Tube video, which is below the article. The English subtitles end somewhere at the 2:55 minute mark. KGS 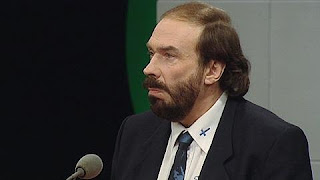 Olavi Mäenpää denies the accusation of encitement against ethnic group

Turku councilman Olavi Mäenpää (SKS) answered on Tuesday, to the rare prosecution of incitement against an ethnic group.

The case is based on a on television YLE’s election exam a couple of years ago, which was designed for candidates of small parties in the parliamentary election. Representing the Finnish People’s Blue-White organization, Olavi Mäenpää presented in the exam, his views on migrants and refugees. Prosecutor considers Mäenpää was guilty of a crime, among other things, the generalization of whole categories of people as criminals and welfare abusers.

The recorded election exam was presented in court, in which Mäenpää told, among other things, that he was ready to take the law into his own hands against the “trash population”.

– Election debates being a free speech zone. Restrictions are closely examined, and the matter is now left to the discretion of the court, said District Prosecutor Jenni Korvenmaa Helsinki on Tuesday, at the conclusion of the district court session. According to Korvenmaa, in the Mäenpää case,it was not a question of criticism, but hate speech. The purpose was to raise the same kind of public hostility against a group, that he feels himself. The district court will deliberate in two weeks

Mäenpää himself challenged the offense. According to him, this was the normal political debate.

– He was asked an opinion, and he said it. He has not called for, or incited against anybody, “said Mäenpää’s lawyer Jaakko Uotila. The defense also challenged the act of intent. Mäenpää said that he uses colorful language, but there was no intention to offend anyone or incite others to violence.

The charges against Mäenpää were raised by assistant state prosecutor Jorma Kalske, and Korvenmaa prosecuted it in court. The criminal charges were made by Ombudsman for Minorities Mikko Puumalainen. An indictment for Yleisradio’s (YLE) share was also being considered. Kalske believes that there’s nothing to criticize about the media’s role, because what’s in question was a live broadcast of an election debate. The journalist does not have a lot of opportunities to influence what the candidates says in a live broadcast, explained Kalske the reasons for the decision.

-The prosecution demands a fine as punishment for Mäenpää. The Helsinki District Court is to give a ruling within two weeks from now. Mäenpää was fined some years ago for an internet column. He said that the punishment for incitement against an ethnic group was carried out by sitting 41 days in jail.

NOTE: Finnish blogger Vasarahammer adds: Even though I don’t support Olavi Mäenpää and I think he’s a genuine bigot, prosecuting him for something he said in an electoral debate two years ago is a travesty of justice. Mäenpää speaks like a loudmouthed bigot and behaves like one. Still, he has substantial support, in his home city of Turku, which by the way is perhaps the most culturally enriched city in Finland.

Videos featuring Mäenpää have been in Youtube for years now and Yle (the Finnish state broadcaster) has not made any attempt in trying to censor those or claim any copyright for them. Mäenpää was convicted of incitement against ethnic group for a web article he published in 2001. Mäenpää had published an anti-islamic article and a cartoon in his website and sentenced to pay a fine, which was converted to a 41 day prison sentence.
Mäenpää had used a term “throat slitters”, which according to the defence attorney referred to the way muslims slaughter sheep. The cartoon depicted an “islamic person”. The district court stated that the cartoon was “obscene” and had no factual content. See Turun Sanomat (In Finnish)