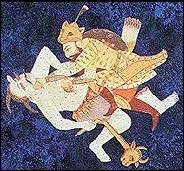 The gifted writer and editor of Europe News, and friend of the Tundra Tabloids, Henrik Raeder Clausen, has an interesting essay recently published at Jihad Watch. Clausen takes on the dilemmas and inconsistencies wrapped within the Koran and the Hadiths revolving around Mohamed’s relationship with paganism, his new found ideology of Islam, and Satan himself.

It’s an interesting and lengthy read, but worth the time. For a religion that is promoted as being one of the “three Abrahamic faiths”, its founder, Mohamed, cared very little for the precepts embedded in the Ten Commandments, which firmly places Islam in a camp all of its own. KGS

What’s so bad about ‘Satanic,’ anyway?

It raised a couple of eyebrows when the Organisation of the Islamic Conference quoted two pages from an article on EuropeNews, discussing if Muhammad was, in fact, a messenger for Satan rather than for God.

In the article based on a television broadcast, Father Zakaria Botros, based on relevant scripture, made a brief analysis of the qualities of Jewish/Christian prophets and compared those to the qualities of Muhammad. What the article did not go into, however, was an analysis of what ‘Satanic’ actually means. We are commonly assuming that ‘Satanic’ means ‘bad’, ‘evil’, ‘wrong’ – to such an extent that even discussing the actual nature of this badness is irrelevant. But if we do not understand what ‘bad’ or ‘Satanic’ means, how can we choose to reject it? Some knowledge of Right and Wrong behaviour is needed for this to be functional.

We first encounter Satan in the Book of Job, which is part of the Old Testament, and the Torah. In this intriguing tale, Satan gets permission (!) by God to tempt Job to disavowing God through a multitude of loss, disease and suffering. Job, staunchly true to God, refuses in spite of poverty and failing health, and is eventually rewarded by even more wealth than he had initially. The morale of this tale, of course, is that one should be true to God under all circumstances, and redemption will come eventually.

An interesting point is that Satan is working by permission from God, not as a separate, opposing entity. Being true to God also implies being true to his teachings, the Ten Commandments etc. Those were good guidelines then and have not lost their value as a moral compass even today. Being a good Jew or a good Christian implies being generally true to these guidelines. Muhammad, born and raised in pagan Arabia, never talked of these and personally broke most of them, as recorded in the Sirat (Ibn Ishaq & Al-Tabari). The Ten Commandments are not generally used in Islam, and as Muhammad violated most, if not all, of them, should be proof that Islam is not an Abrahamic religion, despite claims to the contrary.

Satan earns a few mentions in the life of Muhammad. The first is at the incident known as “The Satanic Verses”. This takes place after Muhammad had been mocking the Meccans for eight years for their paganism and their false gods, calling them to worship the one god he worships. This is interesting, not least because the Meccans had been worshipping Allah for generations before Muhammad – see for instance the chapter on Muhammads’ 5th generation forefather Qusayy (al-Tabari VI pages 19-26).

The events are set in motion by the Quraysh:

Quraysh promised the Messenger of Allah that they would give him so much wealth that he would become the richest man in Mecca, would give him as many wives as he wanted in marriage, and would submit to his commands.