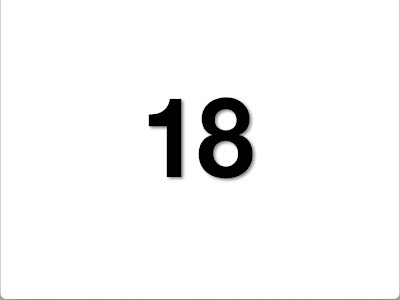 The 18: An end to the UNRWAThe highly political and very phony refugee agency called the UN Relief and Works Agency for Palestine Refugees (UNRWA), has perpetuated the existence of the refugee camps under its control. The UNRWA cares very little for the people that live in these squalled camps, otherwise they would have tried their best to see that these people, like all other refugees throughout modern history, would be relocated outside these camps, in order for them to get on with their lives.Like I said, the UNRWA is a very political organization dedicated not to true the welfare of these people, but for their continued incarceration in the camps, in order to use them as political pawns against the state of Israel. Regardless of what you may think of the Jewish state, no one has the right to play with peoples’ lives and keep them in a perpetual state of limbo, and in run down camps that have become breeding grounds for terrorism. “The 18” states the obvious, end the camps once and for all and let these people get on with their lives. KGS MORE US Tax Dollars to UNRWA

The US State Department announced last Friday that it is contributing an additional $20 million to the UN Relief and Works Agency for Palestine Refugees. (UNWRA)

$13.5m. of the funds, which come on top of $85m. in relief the US had already committed for 2009 will go directly to UNRWA. Another $6m. will go to the International Committee of the Red Cross and $800,000 will be given to the UN Office for the Coordination of Humanitarian Affairs (OCHA).

How did this come about, you might ask. How did American tax dollars get committed to an organization whose sole purpose is to perpetuate the “refugee” status of a single group of people in the world?

Look no further than your local congressperson. The move comes after more than 60 members of Congress wrote to Secretary of State Hillary Clinton last week to convey their “deep concern for the humanitarian situation in the Gaza Strip and to request immediate action by the United States to address this crisis.”

“Failure to address this humanitarian emergency has the potential to produce a crisis of even more unspeakable proportions. We therefore respectfully request that the State Department release emergency funds to UNRWA for reconstruction and humanitarian assistance,” the letter said.

The congresspeople suggested the money be taken from the US Emergency Refugee and Migration Assistance.

In other words, some US members of congress would rather throw good US taxpayer dollars at the Pals. and perpetuate their miserable status, rather than do somethng constructive to actually help these people and put an end to the “refugee” problem that is now in its fourth generation.

Disbanding the UNRWA camps-which have become hotbeds for terror activity–would be the humane thing to do.

As MK Benny Elon explains in his Right Road to Peace Initiative the Israeli position has been no better regarding what to do with the “refugees.”:

“Amazingly, this question has hardly been asked. For many years, Israel preferred to ignore the refugee problem in the hope that in time, it would resolve itself.

Israel’s choice to recognize Palestinian nationalism has brought her to endure countless terrorist attacks and a diplomatic process where Israel is constantly pushed to capitulate on issues that cost lives.”

Americans AND Israelis who see the dangers of a 2-state solution need to speak up now to call for an END to UNWRA–not its perpetuation.