Skip to content
Home
/
2009
/
February
/
28
/
Uncategorized
/
Sweden: Arson Leads to Global Intifada Probe…….
Facebook
Twitter
Google+
LinkedIn
Pinterest
It’s important to note that, not only is Andreas Malm, Sweden’s most prominent anti-Israeli leftist, he is also a “founding father” of Global Intifada. Malm also did a series of hit pieces on the counter-jihad network at the newspaper where he works, Dagens Nyheter. He is also a regular contributor to the Swedish far-Left newspaper, Arbetaren, and founder of the Swedish branch of the Palestinian front group, the International Solidarity Movement. KGS
Police investigators need to look no further than Andrea Malm 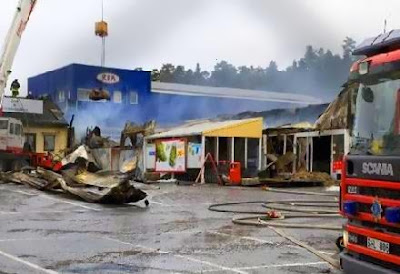 Three supermarkets were destroyed and a fourth damaged as a wave of arson attacks hit Södertälje in central Sweden in the early hours of Thursday morning.
Security police (Säpo) have been called in to investigate a connection between the attacks and an anti-US extreme left wing group.
“We have classified them all as arson and are working on the theory that they were started deliberately,” said Kia Samrell at Södertälje police. Police have not ruled out a connection to fires in the town in December which destroyed the Coop Forum and Ica Maxi supermarkets.¨
An extreme left wing group calling itself Global Intifada claimed responsibility for the December fires and according to reports in the Expressen newspaper, the two Willys stores destroyed on Thursday morning also received warnings from the group.
“We have not been able to confirm that the group were behind the December fires. But the investigation is not yet completed,” underlined Kia Samrell.
Global Intifada, according to a Sveriges Radio report, has been responsible for dealing out leaflets in Södertälje encouraging the public to make Molotov Cocktails and use them on shops selling American products.

Once again Socialists are burning out those who they dislike