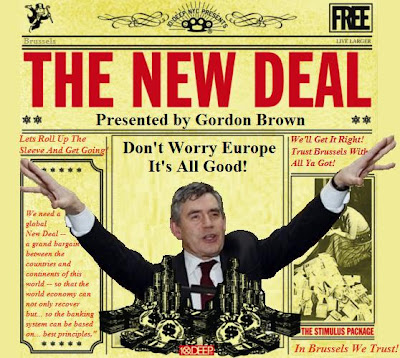 BERLIN, Germany (CNN) — The world needs a “global New Deal” to haul it out of the economic crisis it faces, Prime Minister Gordon Brown of the United Kingdom said Sunday.

“We need a global New Deal — a grand bargain between the countries and continents of this world — so that the world economy can not only recover but… so the banking system can be based on… best principles,” he said, referring to the 1930s American plan to fight the Great Depression.

Brown was speaking as the leaders of Europe’s biggest economies met to try to forge a common position on the global financial crisis ahead of a major summit in London in April. French President Nicolas Sarkozy said the world’s response to the global financial meltdown had to be profound and long-lasting, not just tinkering around the edges.

“Europe wants to see an overhaul of the system. We all agree on that. We’re not talking about superficial measures now or transitional measures — we’re talking about structural measure, which need to be taken,” he said.

The Wall Street Journal: The New Deal is widely perceived to have ended the Great Depression, and this has led many to support a “new” New Deal to address the current crisis. But the facts do not support the perception that FDR’s policies shortened the Depression, or that similar policies will pull our nation out of its current economic downturn.

The goal of the New Deal was to get Americans back to work. But the New Deal didn’t restore employment. In fact, there was even less work on average during the New Deal than before FDR took office. Total hours worked per adult, including government employees, were 18% below their 1929 level between 1930-32, but were 23% lower on average during the New Deal (1933-39). Private hours worked were even lower after FDR took office, averaging 27% below their 1929 level, compared to 18% lower between in 1930-32.

Even comparing hours worked at the end of 1930s to those at the beginning of FDR’s presidency doesn’t paint a picture of recovery. Total hours worked per adult in 1939 remained about 21% below their 1929 level, compared to a decline of 27% in 1933. And it wasn’t just work that remained scarce during the New Deal. Per capita consumption did not recover at all, remaining 25% below its trend level throughout the New Deal, and per-capita nonresidential investment averaged about 60% below trend. The Great Depression clearly continued long after FDR took office.

Why wasn’t the Depression followed by a vigorous recovery, like every other cycle? It should have been. The economic fundamentals that drive all expansions were very favorable during the New Deal. Productivity grew very rapidly after 1933, the price level was stable, real interest rates were low, and liquidity was plentiful. We have calculated on the basis of just productivity growth that employment and investment should have been back to normal levels by 1936. Similarly, Nobel Laureate Robert Lucas and Leonard Rapping calculated on the basis of just expansionary Federal Reserve policy that the economy should have been back to normal by 1935.

So what stopped a blockbuster recovery from ever starting? The New Deal.

Some New Deal policies certainly benefited the economy by establishing a basic social safety net through Social Security and unemployment benefits, and by stabilizing the financial system through deposit insurance and the Securities Exchange Commission. But others violated the most basic economic principles by suppressing competition, and setting prices and wages in many sectors well above their normal levels. All told, these antimarket policies choked off powerful recovery forces that would have plausibly returned the economy back to trend by the mid-1930s.

The most damaging policies were those at the heart of the recovery plan, including The National Industrial Recovery Act (NIRA), which tossed aside the nation’s antitrust acts and permitted industries to collusively raise prices provided that they shared their newfound monopoly rents with workers by substantially raising wages well above underlying productivity growth. The NIRA covered over 500 industries, ranging from autos and steel, to ladies hosiery and poultry production. Each industry created a code of “fair competition” which spelled out what producers could and could not do, and which were designed to eliminate “excessive competition” that FDR believed to be the source of the Depression.

These codes distorted the economy by artificially raising wages and prices, restricting output, and reducing productive capacity by placing quotas on industry investment in new plants and equipment. Following government approval of each industry code, industry prices and wages increased substantially, while prices and wages in sectors that weren’t covered by the NIRA, such as agriculture, did not. We have calculated that manufacturing wages were as much as 25% above the level that would have prevailed without the New Deal.

And while the artificially high wages created by the NIRA benefited the few that were fortunate to have a job in those industries, they significantly depressed production and employment, as the growth in wage costs far exceeded productivity growth. More here.