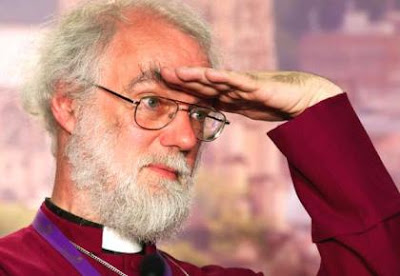 On the anniversary of the interview in which Dr Rowan Williams said it “seems inevitable” that some parts of sharia would be enshrined in this country’s legal code, he claimed “a number of fairly senior people” now take the same view. He added that there is a “drift of understanding” towards what he was saying, and that the public sees the difference between letting Muslim courts decide divorces and wills, and allowing them to rule on criminal cases and impose harsh punishments.

But then again, maybe they’re not much behind me after all 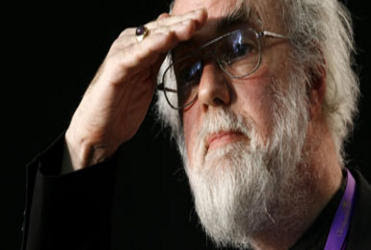 “However critics insist that family disputes must be dealt with by civil law rather than according to religious principles, and claim the Archbishop’s comments have only helped the case of extremists while making Muslim women worse off, because they do not have equal rights under Islamic law.”Here are a few quotes from the article that fully exposes the nasty stupidity of the whole venture and scheme, and should give long pause to those who are still unsure over which side of the issue they support.

“But Douglas Murray, the director of the Centre for Social Cohesion, said: “He has started a process which is deeply dangerous, damaging to Britain and to Muslim women in Britain. “It was a wicked move because it undermines the progressives and gives succour to the extremists. “How does the Archbishop of Canterbury know, sitting in Lambeth Palace, that a woman in Bolton has volunteered to give up half her inheritance to her brother?Neil Addison, a barrister who specialises in religious discrimination cases, said: “I think the Archbishop has failed to give a justification for sharia law. What’s the advantage it would bring to British Muslims and to British law? “I believe his speech was deeply harmful to British Muslims because it helps the separation of them from the rest of society. “What he was asking for was sharia dealing with wills and divorce, which are public areas of law, not private ones.”

Western politicians should stop listening to the childish nonsense coming from these doughy headed religious leaders, and give the boot to both sharia and those who support it, including the Mr.Spock look alike. 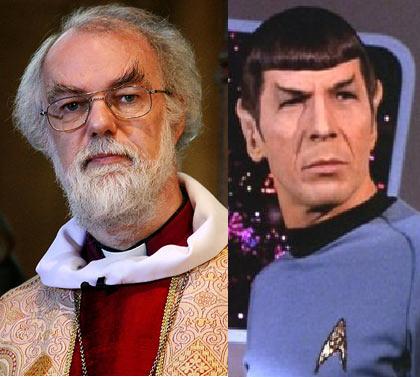 NOTE: The real Mr.Spock would handle the issue of sharia in the following way: “If I were human, I believe my response would be: ‘go to hell’. If I were human. (The Final Frontier )H/T: Baron Bodissey, Gates of Vienna